Horrible on every level. The 1-star rating comes from the assurance that within 99 minutes, the cast is bound to make you laugh at least once. Made for the most hardened fans of the cast.

Rated R for strong bloody violence throughout, pervasive language, and some sexual content. 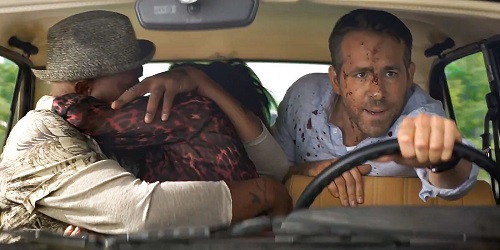 It was very interesting to watch Hitman’s Wife’s Bodyguard without having seen the first film. After walking out of this one, it doesn’t look like I missed much with The Hitman’s Bodyguard. That said, I had to preface this review with my acknowledgement of not having seen the original. My fellow critics declared, though, that this was worse than the first. Scary thought, but one thing’s for sure, this is a movie that begs you to actively hate it while watching suffering through it. What makes it even worse is a cast of reliable actors: Ryan Reynolds, Samuel L. Jackson, Salma Hayek, Morgan Freeman, and Antonio Banderas.

As much as I enjoy seeing them together on screen, it would be nice to actually see what they’re doing. It’s not like this is the first time any of them have starred in an action film. Leave it to hack action director Patrick Hughes (Expendables 3 and the first Bodyguard outing) to let his cinematographer (Terry Stacey) film everything as close as humanly possible, while his editors (Michael J. Duthie, Jack Hutchings) make shredded cheese out of every scene. It’s a film that doesn’t necessarily need to make a lick of sense — it is an action/comedy after all — but man, the screenplay from Phillip Murphy, Brandon Murphy, and returning scribe, Tom O’Connor, isn’t even fun on turn-your-brain-off levels.

Michael Bryce (Reynolds) has just won the coveted AAA Bodyguard of the Year award, only to violently realize that it’s all just the same nightmare he has “once… a night,” and has still lost his license. His therapist insists he take a sabbatical and give up bodyguarding and guns to get back in touch with himself. Things quickly take a turn for the worst as Sonia Kincaid (Hayek) unleashes great vengeance and furious anger when she arrives to force him into helping her find her husband, Darius (Jackson). She claims Darius has been taken by the mafia, but a bigger foe is afoot — Banderas’ Aristotle — sending our intrepid trio on the lamb across Greece to help stop Aristotle for Boston-transplant/Interpol-associate/xenophobic-at-large Bobby O’Neill (Frank Grillo).

Hitman’s Wife’s Bodyguard’s pacing is pedal-to-the-metal from frame one. It’s an assaulting film that never lets up and just when it finally does, you fully realize just how boring it all is. Not even Reynolds’ snarky charm is enough to coast the film along when it’s constantly being plagued by insultingly expletive-filled one-liners and so many random explosions it should’ve earned Wile E. Coyote a co-director credit. At one point, Bryce tells Sonia that her mouth needs an exorcism and the same thing could be said for the whole film. It’s frantic and desperate with plot points, and action scenes, thrown in our faces with reckless abandon.

This is all just the same sad song that shows box office returns mean you have to make a sequel, but no, no you don’t. I have yet to hear from anyone who thought this was necessary, but that’s what happens when what should have been a one-off winds up making $176 million worldwide on a mere $30 budget. All we’re left with are jokes of the most obvious kind, loud and overbaked action scenes, nihilist dialogue, horror movie level gory violence, a cast rubbing our faces in their luxurious filming locales, and just a general overall case of WTF*ckery at every turn. Hitman’s Wife’s Bodyguard is opening in theaters only, but this is the last movie anyone should make their return to theaters.