A boring, snail-paced, true life story that's neither uplifting or even intense. Made for fans Hallmark or Lifetime channel movies.

Rated PG-13 for a disaster sequence and some language. 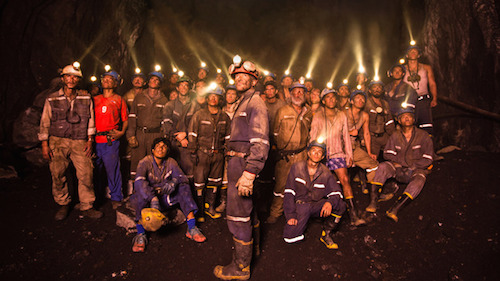 When’s the last time you ever sat through a made-for-TV movie and thought to yourself: “Man, that would have been killer on the big screen?” Never? That’s what I thought. Unfortunately for the true story The 33 — based on the 2010 Chilean mining disaster — director Patricia Riggen never manages to dig the film out of the depths of manipulative melodrama. Three screenwriters — Mikko Alanne, Craig Borten, and Michael Thomas — certainly doesn’t help either because they never take the time for one scene of authenticity to make you care about the devastated miners trapped inside a San Jose mine for 69 days. Not even the dependable Antonio Banderas can keep our interests, let alone the fact that — SPOILER ALERT — all of the ill-fated 33 survive.

For those who may not be as well versed in what happened, in 2010, Mario Sepulveda (Banderas), along with 32 other miners, started their day like any other day. What they didn’t know was that “the heart of the mountain” was going to come crash down on them, leaving them stranded with next to no food or water. Down below, Mario and bossman Luis Urzua (Lou Diamond Phillips) must keep everyone sane and safe while above, Minister Laurence Golborne (Rodrigo Santoro), the Minister of Minery of Chile, must keep his promise to the miners’ loved ones to find a way to get the men back to the surface.

Not meaning any disrespect to the miners who were trapped below the surface, they have not been given their due with The 33. The film suffers from an excruciating pace, deflating any kind of tension to their eventual rescue. It doesn’t help that the entire cast is directed to histrionics and overacting every chance they get. It’s also extremely distracting that they decided to make the film in English. There’s absolutely no reason the cast couldn’t have been allowed to speak in their native tongues; it just makes the film feel even more whitewashed than The Help did. It ends informing the audience how the men were never compensated for the disaster, yet there’s an online petition stating the same thing about the movie. Hypocrisy at its finest — if it’s true.

But I suppose it really doesn’t matter, I have no idea who the film was made for. The miners themselves? Because it sure sounds like they wouldn’t even be able to pay to see it. Lets hope they at least get invited to the premiere. Maybe it’d seem more powerful if you were sitting next to one of them. As it stands, it’s just another pseudo-disaster movie that would feel right at home on the Hallmark Channel. Something that should never be said of a big screen Hollywood biopic.