Standard operating procedure August drivel. Made for hardcore fans of the game and only the most forgiving action lover.

Rated R for sequences of strong violence, and some language. 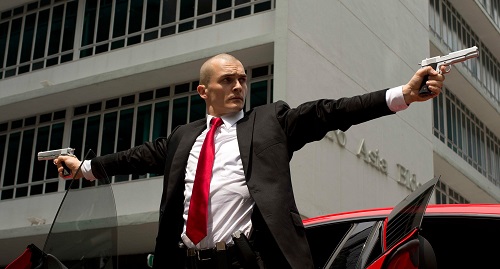 The first Hitman is not remembered for being a box office smash way back in 2007. However, on a budget of $24 million, the worldwide gross of thousands shy of $100 million is actually a pretty decent success. It makes sense that a sequel was announced, even if it never came to fruition. Now, eight years later, our titular anti-hero has returned in Hitman: Agent 47, but as we’ve already seen before from 20th Century Fox, it’s way too little too late. While not the complete misfire/disaster as Fantastic Four, there was little life to be found in the first film, and even the video game’s biggest fans are going to find little here to like.

Agent 47 (Rupert Friend) is a result of human experimentation by the shadowy ICA (International Contract Agency) and he’s on a mission to find Katia (Hannah Ware), the daughter of the project’s founder: Litvenko (Ciarán Hinds). Also hot on their tail is John Smith (Zachary Quinto), secret agent for the Syndicate, lead by Le Clerq (Thomas Kretschmann). Now, a game of one upmanship and every man for himself erupts as the two organizations’ top assassins are pitted against each other to take out the father and daughter.

And that’s basically it. Director Aleksander Bach makes one of the most boring debuts ever, something an action film filled with assassins should never be. Let alone that the action scenes think they’re more over-the-top than they actually are. Just when it looks like something exciting is about to happen, the scene downgrades to pedestrian and never hits the gas. It’s a whiplash effect that makes the film feel far more convoluted than it really is. It’s a shame that once again, Fox has managed to pump out another reboot — and in the same month no less — probably just to keep the film rights. Coincidentally, a series Fox did let go of — The Transporter — is also headed back to theater for a reboot. I have a feeling that one will be what this film should have been. But that will come as no surprise considering those films have always known how ridiculous they are. Bach should have gone the way of those and gone as bombastic as possible, it’s just about the only way to bring life to the Hitman franchise.

Unlucky for them, screenwriters Michael Finch (Predators, The November Man) and Skip Woods ( X-Men Origins: Wolverine, The A-Team, and the first Hitman) can’t even manage to make a scene of dialogue coherent. Combined with Bach’s lackluster pacing, you’ll undoubtedly find yourself nodding off, only making what’s happening onscreen all that more confusing. If there was at least a sense of fun we could turn off our brains and enjoy the madness, but even that’s not possible. Hitman: Agent 47 doesn’t even jump into so-bad-it’s-good entertaining.

This is standard operating procedure August drivel, something that looked like a thing of the past. But alas, here we are, with the return of the movie dump month. The cast never looks like they’re having any fun, which never translates well to the audience. It’s taken way too seriously — which normally could at least result in a few spurts of unintentional hilarity. But all Hitman: Agent 47 will leave you with is a concern that you can’t remember a second of what you just watched. This is kind of movie that just goes in one eye and out the other.