Missed opportunities galore in the ultimate bait-and-switch that fails miserably on its confrontational promise. Made for only those with the lowest expectations.

Rated R for bloody horror violence and gore, language throughout and some sexual references. 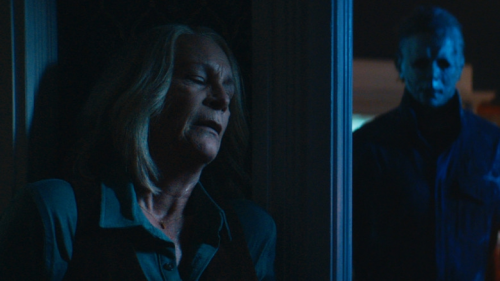 After 11 films — not to mention countless novels, comic books, and even video games — it should not be hard to make a Halloween film. It’s Halloween, Michael Myers shows up, people die, Michael may or may not be dead, roll credits. But David Gordon Green somehow managed to create a new trilogy — dubbed by some as the “H40” timeline — that gets progressively dumber, and even more absurd, with each film.

Green’s 2018 Halloween was a perfect direct sequel to John Carpenter’s classic original. But then Halloween Kills decided to take the slice-and-dice route by upping the kill count while lowering our brain cells. Now, Halloween Ends continues the trend, thankfully marking an end to Laurie Strode’s decades of torture, while relieving viewers that yes, it all may be over.

Regardless of how much fun it may seem to see Michael in theaters again, Ends is best watched from your own couch with it premiering simultaneously on Peacock.

It’s Halloween night, 2019, a year has passed since Michael (Nick Castle and James Jude Courtney) wreaked havoc on Haddonfield, Illinois. While evil did not die that night, it did manage to escape. Corey (Rohan Campbell) has just arrived to babysit Jeremy (Jaxon Goldenberg) — who now talks in his sleep and is scared of the dark thanks to Michael’s rampage — and through a series of events, Jeremy accidentally dies, leaving Corey to blame.

In the present, we find Laurie (Jamie Lee Curtis) and Allyson (Andi Matichak), grandmother and granddaughter, trying to live a life of peace in the wake of Michael having killed Allyson’s mother, Karen. But as we know, fate never changes, and Michael eventually comes calling. This time, after Michael being disturbed by Corey, who is bullied in the aftermath of Jeremy’s death as the new town Boogeyman. Has Michael really returned, or is Corey to blame for the new deaths that have risen in the little town of Haddonfield?

While it was a nice change of pace to see the citizens of Haddonfield happy, it doesn’t take long before the new murders take their toll. The cast do what they can with the bizarre screenplay — courtesy of four writers (never a good sign): Paul Brad Logan, Chris Bernier, Danny McBride, and Green — that has some fun with references and nods to the previous films (how does a character happen to know pieces of the original score?). But it all just feels like a spec script about the cycle of violence, meditations on evil, survivor vs. monster, revenge thriller, all wrapped up in a meh Halloween-burrito.

Everything from watching the town burn, to Michael being able to see into one’s soul, are par for the course in this version of Halloween. For over an hour, you can barely tell you’re even watching a film within the franchise. Eventually, things finally start to liven up in the last 30 minutes with the promised confrontation of Laurie vs. Michael. Unfortunately, that means you’re sitting through about 80 minutes of fluff. By the time the finale finally rears its William Shatner-masked face, it’s too little too late, only leaving us glad to see that this iteration of Halloween finally Ends.