Hilarious and deliciously absurd. Made for fans of the Coen Brothers and those looking for a good screwball throwback to Old Hollywood. 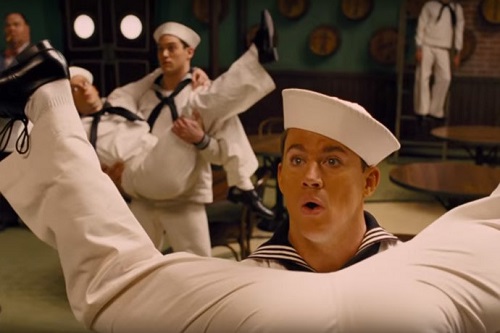 The Coen brothers are probably the most idiosyncratic directors working today. Joel and Ethan have been delivering nothing but consistent work ever since they made a huge splash with their clever noir Blood Simple. Even what some might consider their lesser work have more brilliance per frame than most directors who rely on quantity over quality. They include: The Hudsucker Proxy, Intolerable Cruelty, The Ladykillers, and Burn After Reading. What they all have most in common is their dependence on comedy.

While their more serious flare is more widely recognized — especially when it comes to awards season — you’re never hurting for entertainment watching a Coen brothers title. And now, with Hail, Caesar!, they’re at it again. As another love letter to Old Hollywood, their unabiding love of classic filmmaking shines through better than ever. This may be their most “inside” picture yet, but it’s deliriously funny at times, even if some may find the plot a little meandering.

At Capitol Pictures, Eddie Mannix (Josh Brolin) is the man with the plan. A studio fixer, he’s always around to keep the well-oiled machine running no matter what cog gets thrown in the wheel. His latest conundrum is the disappearance of their biggest star Baird Whitlock (George Clooney), is being held for ransom by “The Future.” Meanwhile, he’s tackling everything else thrown in his path from covering up the husbandless star DeeAnna Moran’s (Scarlett Johansson) pregnancy to director Laurence Laurentz (Ralph Fiennes) dealings with cowboy Hobie Doyle (Alden Ehrenreich) to the endless barrage of twin columnists Thora and Thessaly Thacker (Tilda Swinton on double duty) trying to find a scoop on Whitlock’s extracurricular activities. All this while facing a possible career change for the sake of his family.

If anything, nobody does screwball as well as the Coens. They plow through every film with aplomb, never caring whether a scene may feel like it’s running too long. Let’s just say that if you find yourself wondering where something may be going, they deliver one of the best payoff scenes in a while. Their gigantic cast is having the time of their lives, even if George Clooney is playing a more spastic version of his typical characters. Channing Tatum may feel underused, but winds up being an even better plot twist than he did in The Hateful Eight. You’ll never see it coming. And even Frances McDormand — wife of Joel — is in only one scene and it’s the best thing in the movie. It reminds me of the accidental inhaler shooting from Intolerable Cruelty and will go down as one of the funniest scenes of the year.

While some may be questioning the February release date, Hail, Caesar! is no slouch. It’s every bit as hilarious as you’d expect from the Coen brothers. Never deserving to be brushed off as a mere trifle on their resumes, this star-studded affair has their trademark wit coursing through its veins. It even finds a moment or two to get in some Trumbo-esque jabs at the Hollywood system. Let’s just say that they’re making a poignant point with who makes up “The Future.” To say the Coen brothers have never made a bad film is an understatement and Hail, Caesar! may not be everyone’s cup of tea, but mark my words, the film is endlessly entertaining and deliciously absurd in all the right ways. Considering how stale January was, Caesar is a huge leap forward for the year and should not be missed. Hail, Caesar! indeed.