Another fantastic addition to this fall’s must-see lineup. Made for hanks fans, Spielberg fans, spy genre fans,basically anyone.

Rated PG-13 for some violence and brief strong language. 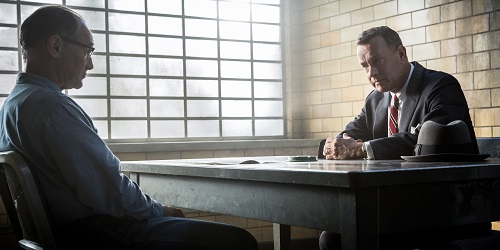 If there’s one thing Steven Spielberg manages to nail in his long repertoire of film, it’s the period drama. Always based on true events, the man always delivers. With Lincoln, War Horse, Munich, Amistad, Schindler’s List, Empire of the Sun, and The Color Purple, most directors would be lucky to ever make even one film as good as any of those.

The man can always be counted on for at least delivering powerful and top-notch entertainment, even if some are better than others — The Lost World anyone? OK, I love that one on a guilty pleasure level — but still, you have to admit there are plenty of sequences featuring nail-biting suspense. And the same can definitely be said of his most recent opus Bridge of Spies.

This time, he’s back with Tom Hanks, and armed with the Coen brothers (Joel and Ethan) on screenplay duties, to create a crackling look at a man faced with the impossible task of defending an accused Russian spy.

Bridge of Spies opens with a breathtaking chase scene through the streets and subway of 1957 Brooklyn, New York. Rudolf Abel (Mark Rylance) has just been arrested for espionage and is quickly thrown in prison. Insurance lawyer James B. Donovan (Hanks) is called upon to take Abel’s case. James is instantly thrust into the public eye — putting himself, and his family in peril along the way — while trying to prove that America really does stand for justice for all. Things take a drastic turn when a U.S. pilot gets shot down in Russia, pitting the two countries against each other, demanding the return of their countrymen.

If there’s one thing Spies has working against it is the 141 minute runtime. The pace is damn near perfect — with the Coen Brothers dialogue being of particular icing on the cake — but you may feel a wee bit restless if you’ve been up since 4:30 a.m. Thankfully, the film boils with suspense, and even those who are familiar with the story will still be enthralled.

Hanks and Rylance give knockout performances and Spielberg shows he has no signs of slowing down. Armed with some of the best dialogue of the year also helps. The big surprise, however, may be the film’s humor. Hanks has always been able to play dramatic mixed with comedic and vice versa. It’s just part of why he’s so damn good. And he plays off Rylance with gusto.

There’s not anything I would change about Bridge of Spies — save for watching it again with a full night’s rest under my belt — making it one of the year’s best films, in a year already overflowing with great films, and spy films at that! Hopefully word-of-mouth can help the film find an audience. We all know when people mention Spielberg and blockbuster, we’re never talking about his period dramas, but for once, maybe that can change. Bridge of Spies is another fantastic addition to this fall’s must-see lineup.