Titans battle royale where the true winner is us. Made for fans of WB's MonsterVerse and anyone looking for a smashing reason to hit their local IMAX. If it's open that is. 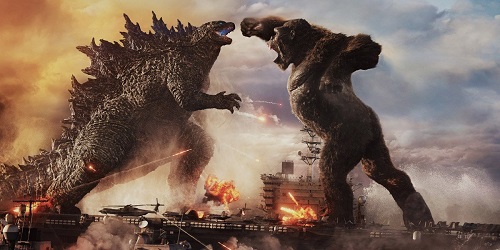 It only took three films before our favorite Titans — Godzilla and King Kong — got to duke it out. As the fourth MonsterVerse entry it also has the best director so far in Adam Wingard. Wingard may be best known for small horror/comedies — You’re Next, The Guest, Blair Witch — but he clearly loves both of our city-decimating stars as much as we do. Godzilla vs. Kong may be premiering simultaneously in theaters and HBO Max, but an IMAX screen is where this showdown deserves to be seen. If theaters are open in your area, and you feel comfortable going, that’s absolutely where it will be best viewed.

Somewhere on Skull Island, Monarch Post 236 is acting as a Kong Containment facility. Here, Kong has been studied by Ilene Andrews (Rebecca Hall) for the last 10 years, while Kong has also bonded with the young, deaf, native Iwi girl, Jia (Kaylee Hottle). When Godzilla makes a seemingly unprovoked attack in Pensacola, he’s no longer the hailed savior who saved San Francisco from MUTO and another battle of monsters culminating against Ghidorah in Boston.

With Godzilla on the defense, Hollow Earther Nathan Lind (Alexander Skarsgard) comes to Ilene to enlist the aid of Kong to pit them against each other to save mankind. Little do they know, sinister motives are afoot looking to unleash an even bigger threat than either so-called “monster” Titan. Madison Russell (Millie Bobby Brown) is on the case to find out why Godzilla is acting out, with the help of classmate Josh (Julian Dennison) and conspiracy podcaster Bernie (Brian Tyree Henry).

There are movies that you could call critic-proof, and there are movies like Godzilla vs. Kong. Does this need in depth character review or critical dialogue analysis? Absolutely not. (Although the heart and soul of the film is the connection between Kong and Jia.) Is it way easier to follow than Godzilla: King of the Monsters? Definitely! Is it every bit as fun as Kong: Skull Island? And then some! Thankfully for both sides, Wingard — along with screenwriters Max Borenstein (Godzilla, Kong: Skull Island) and Eric Pearson (Marvel’s Agent Carter, Thor: Ragnarok, Black Widow) — manages to appease both sides of the fight. I wouldn’t be surprised if most of the fun falls on Pearson’s involvement considering his MCU outings, but it helps to have Borenstein along for continuity.

It also helps that most of the action has moved from dead-at-night rainstorms to broad daylight. Whether it’s the trailer-showcased air force carrier attack, or the extended grand finale, the action is relentless and always dazzling. This is also the shortest of the MonsterVerse films and there are no end credit scenes. As suspected, most of the supporting cast can’t help but fall victim to being little more than exposition: Brown remains a plucky heroine, Henry feels like a shoehorned cohort, Dennison continues to go underutilized in his U.S. endeavors, Kyle Chandler is totally wasted in just a mere few scenes, while Demian Bichir at least relishes his part. In the end, let’s face it, we came to let them fight, and on that front, the real winner of Godzilla vs. Kong is us.