Godzilla: King of the Monsters

A monster mashup that paves the way for next summer's 'Godzilla vs. Kong,' let's get ready to rumble! Made for godzilla and kaiju fans who just want to watch the world crumble beneath his feet.

Rated PG-13 for sequences of monster action violence and destruction, and for some language. 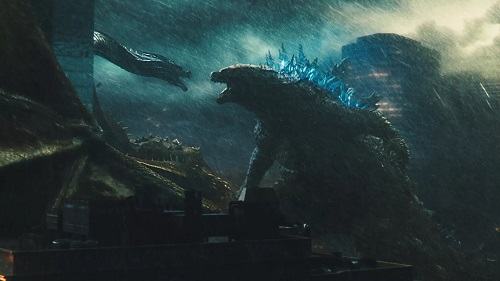 It took five years to get a sequel to Gareth Edwards’s Godzilla and it was worth it. Kong: Skull Island managed to hold us over. But now, Godzilla: King of the Monsters proves how well Warner Bros.’s MonsterVerse is working. And who better to keep it in high gear than Michael Dougherty, director of Trick ‘r Treat and Krampus. Godzilla has finally returned and continues to breathe subatomic life into the 65-year-old Toho property.

Five years ago Godzilla turned San Francisco into ground zero. Dr. Emma Russell (Vera Farmiga) has made it her mission to figure out how to communicate with the newly risen Titans after losing her son in the destruction. Dr. Mark Russell (Kyle Chandler) has decided to abandon his wife, Emma, and daughter Madison (Millie Bobby Brown) due to the calamity. But the family — along with Monarch and the rest of the planet — soon become stuck in the fight of their lives after Colonel Alan Jonah (Charles Dance) puts his plan into action to awaken more Titans (Mothra, Rodan, and King Ghidorah) in an attempt to revive the planet from climate change.

If you’re in the market for spectacle, look no further. Dougherty makes good on his promise for a huge monster battle royale, decimating the globe in the process. It’s gonna be interesting to see how Godzilla vs. Kong plays out, considering there’s not a whole lot of world left. And while some could consider this spoiler territory, don’t act like you forgot what Las Vegas and San Francisco looked like by the end of the first Godzilla.

The cast are on point, even if Farmiga seems a little flustered with her role before the credits roll. But Brown makes a great debut, with the film never pushing her to stretch too far out of her comfort zone. And Chandler has been repeatedly making a great pseudo-action man in everything from this to Peter Jackson’s King Kong to J.J. Abrams’s Super 8. While always a great everyman, it’s fun to see him kick it up a notch when things take a turn for the worst.

Dougherty has a lot of fun with the screenplay — co-written by his TrT/Kampus cohort Zach Shields — paying respect to the glory days of Godzilla. From Akira Ifukube’s original Gojira score to a remake of  Blue Öyster Cult’s “Godzilla,” Dougherty clearly adores the franchise. He’s also come up with some amazing monster fights and beautiful imagery. Not something typically associated with monster films. It may not be the smartest entry — there are some obvious plot holes and dopey character moments — but it’s definitely one of the biggest. There are certain films that demand to be seen on the biggest screen possible, and this just jumped to the top of the list and IMAX is the only way to go.