A squirrely superhero origin story that rises to the occasion! Made for families looking for streaming options that are actually worth everyone's time.

Rated PG for some mild action and thematic elements. 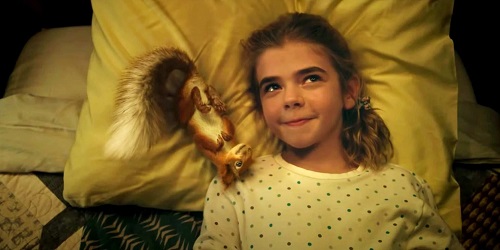 When you’ve got Marvel and Star Wars in your Mouse House, might as well use them to your advantage. Which is what director Lena Khan and writer Brad Copeland did with Flora & Ulysses. Based on the novel by Kate DiCamillo, this Disney venture also includes fun sci-fi nods geared toward adult fans of similar fare. Almost every scene has something related I’m sure all viewers have either laying around or up on the wall.

But it all comes together with a charming cast who keep the movie from being too tedious, without ever becoming too cloying, or less than cinematic. So while Marvel continues to hold out on a Squirrel Girl movie, Disney+ is happy to tide us over.

Flora (Matilda Lawler) is gripping with her new living situation after her parents — Phyllis (Alyson Hannigan) and George (Ben Schwartz) — have split. While mom may be a successful romance novelist, dad is an aspiring comic book artist: i.e. unsuccessful.

One fateful morning, Flora rescues a squirrel from her neighbor’s all-terrain vacuum, and she comes to find out her new friend is actually a superhero named Ulysses (voiced by John Kassir). With the help of her neighbor’s hysterically blind nephew, William Spiver (Benjamin Evan Ainsworth), and her dad, they team up to help Ulysses find his fate. All while keeping out of the clutches of disgraced Animal Control Officer Miller (Danny Pudi).

To be honest, I have been hesitant to embrace the world of streaming. With 2020 a non-stop nosedive, I have finally come to realize that while we may be returning to theaters eventually, this is the new normal. So it’s nice to see Disney stepping up their game with theatrical Disney+ releases.

Khan embraces the film’s superhero aesthetic, while getting some major assistance from her sidekicks: the cast. Lawler and Hannigan look like they could be real life mother/daughter, and they both have great comedic chemistry with Schwartz. The rest of the cast are having just as much fun, especially considering everyone is acting against a CGI squirrel.

In a nice change of pace, Flora keeps the film grounded in an appreciative level of cynicism, with Lawler injecting enough rambunctious energy that she never feels pessimistic. This is also the film’s biggest anchor as it prevents the audience from wondering if the story is becoming too fantastical, overdramatic, or trying to play off a twist ending where things aren’t what they seem. Oddly enough, I wasn’t sure if the film had managed to keep my three-year-old’s interest, but as soon as the credits rolled she asked, “Can we watch it again?”

Flora & Ulysses is an origin superhero movie through and through, something Disney knows a thing or two about. If the studio can keep up the pace with this level of Disney+ offerings — not to mention what’s happening over in the MCU with WandaVision — hopefully their streaming options are only going to keep getting better from here.