With girl power to spare, 'Captain Marvel' smashes the superhero glass ceiling and I can't wait for the inevitable showdown with Thanos. Made for anyone who isn't an internet troll.

Rated PG-13 for sequences of sci-fi violence and action, and brief suggestive language. 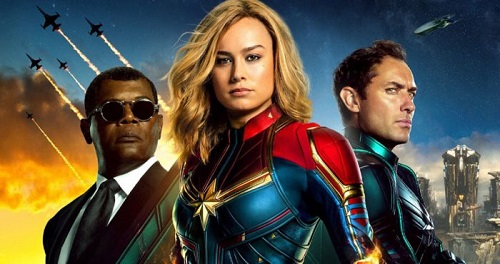 After 11 years and countless male superheroes, it’s obvious the entire Marvel Cinematic Universe rests in the hands of Captain Marvel. Here’s a superhero who fulfills her own prophecy by the end credits as the one person who could take down Thanos all by herself. Something our beloved Avengers are in desperate need of after the snapture of Infinity War. A superhero so mighty she forced Rotten Tomatoes to reconfigure certain sections of their website! Trolls be damned, Captain Marvel is the badass we’ve been waiting for and didn’t even know it. And appropriately making her big screen debut on International Women’s Day to boot.

Kree, 1995, Vers (Brie Larson) has been suffering from nightmares involving a woman from her past. Yon-Rogg (Jude Law) accepts an early morning spar where he warns her to control her emotions if she ever wants to control her abilities. After using her powers to defeat Yon-Rogg, Vers is tasked with a mission by the Supreme Intelligence (Annette Bening) to rescue an undercover Kree operative. Turns out, they’re really in the midst of a Skrull ambush, and Vers is taken hostage by Talos (Ben Mendelsohn). In a daring escape, Vers crash lands on Planet C-53 (Earth) where she meets S.H.I.E.L.D. agents Nick Fury (Samuel L. Jackson) and Phil Coulson (Clark Gregg). Now, Vers must learn who she truly is — Captain Carol Danvers — and work alongside Fury to end the war between the Kree and Skrulls, once and for all.

I am admittedly a Marvel fanboy. Even some of the weakest entries — Thor: The Dark World — I gave a more glowing review than deserved. So it may come as a surprise that the first 20 minutes of Captain Marvel are not great. Full of super dark cinematography, choppy editing, and a sluggish pace, it’s not until Danvers finally gets to Earth when the film kicks into gear. It also starts to find time to flesh out Danvers and her past, with directors/co-writers Anna Boden and Ryan Fleck giving ample time to some much needed characterization.

Captain Marvel is not a perfect film, but as a huge Hollywood blockbuster, not many are. What it is, is fun.. Filled with ample girl power, ’90s nostalgia, and a pinpoint soundtrack, it lives up to the hype, even if not exactly flying passed it. At least Larson kicks as much butt as we hoped she would. She’s the perfect embodiment of Danvers. Samuel L. Jackson is super chipper and hilarious as a young deaged Fury with both eyes and no chips on his shoulders. And to say Goose the cat steals the show is an understatement. There’s also a fantastic Stan Lee cameo — truly one of his best ever — and two end credit stingers.

Captain Marvel is prepped and ready to break the superhero glass ceiling and I can’t wait to see how she tackles the fallout of Infinity War and any additional sequels of her own.