Everything Everywhere All at Once

Come for the kung fu and hot dog fingers, stay for the googly-eyed character transcendence. This thing, err, rocks! Made for audiences looking for some razzle dazzle to go along with their existentialism, or vice versa.

Rated R for some violence, sexual material and language. 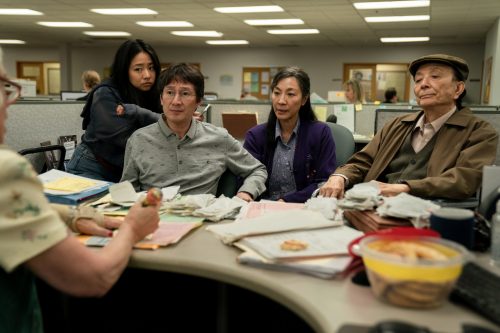 Sometimes when a director — or directors in the case of Everything Everywhere All at Once — aims for the stars, movies wind up with a case of style over substance. For Dan Kwan and Daniel Scheinert (collectively known as the Daniels), they’ve made a breakthrough case of finding a way to be astonishingly entertaining, with a hefty helping of existentialism. If you want to turn your brain off during a madcap kung fu extravaganza, the Daniels found a way to not only accomplish this feat, they also deliver a heartbreaking film about generational trauma and mother/daughter relationships, full of instantly iconic sequences to boot.

Evelyn (Michelle Yeoh) is tired. Tired of running her laundromat, tired of having to keep her daughter Joy’s (Stephanie Hsu) secret from her father, Gong Gong (James Hong), tired of being married to Waymond (Ke Huy Quan), and tired of being audited by Dierdre Beaubeirdra (Jamie Lee Curtis) with the IRS. But what Evelyn doesn’t know is that today is a day when destiny comes calling. For the evil Jobu Tupaki (also Hsu) has been wreaking havoc through the multiverse, and only Evelyn has the power contained within to stop Jobu and save everyone.

Everything Everywhere is one of those movies that’s so hard to pin down a genre. Walking back to our cars, my guest mentioned that we’ve seen a lot of WTF movies, but this one takes the cake. To which, I responded, “It certainly lives up to its title. We’ve finally seen just about everything, everywhere, and all at once.” It’s a showcase for all — especially the directors — and an amazing opportunity for Yeoh to be front and center where she’s always belonged. While no stranger to lead roles per se, it’s the first time she’s so breathlessly taken charge in a U.S. production and it’s long overdue. Quan and Hsu also give standout performances. It’s awesome to have “Data”/Shortround back on the big screen and he’s just as hilarious and charming as ever.

For those coming to Everything Everywhere looking for a kung fu blowout, never fear, there are plenty of action scenes to satisfy. But what may surprise audiences is being sidelined by so much existentialism. The Daniels are no strangers to this, as they also smothered the same kind of philosophizing with hilarious lowbrow shenanigans in Swiss Army Man. It’s a miracle it all comes together the way it does, but they really make it work. This one will undoubtedly be getting brought up again come award season. This weekend, A24 has finally expanded Everything Everywhere All at Once as a wide release. Come for the kung fu and hot dog fingers, stay for the googly-eyed character transcendence.