With a similar story to the original, made with new characters, new moves and a different form of martial arts, The Karate Kid is a sure crowd-pleaser. Made for everyone – fans of the original or not. 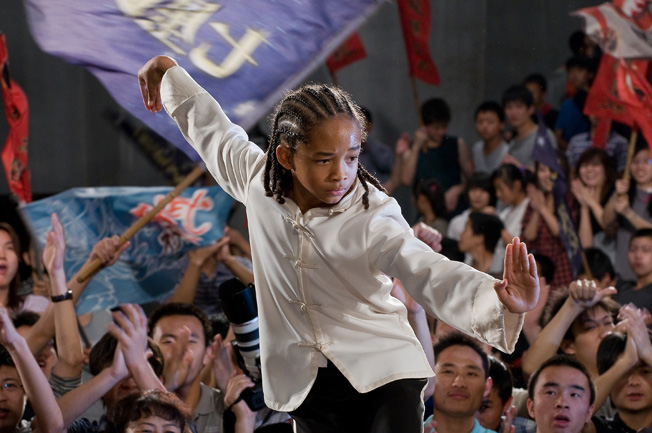 Lately, I have been asked many times, “Of all movies, why remake The Karate Kid?” One, it is not a remake and two, until now you have never been able to re-watch a movie for the first time. The new Karate Kid has so many differences from the original while maintaining many similarities, it truly feels like you are watching the original film for the first time again.

In the new Karate Kid – which actually should be titled The Kung Fu Kid – Jaden Smith (The Pursuit Of Happyness, The Day The Earth Stood Still) plays Dre, a 12-year-old kid with attitude who moves with his mom from Detroit to Beijing, China. After making friends with a local girl, Dre is attacked by a group of Kung Fu bullies. The beatings become routine until Dre is taken in and trained by quiet Kung Fu master Mr. Han (Jackie Chan). Their deal: that Dre must beat the group of bullies in a national Kung Fu tournament and the bullies will forever leave him alone.

Not only are the names and locations different from the original, but the tools used to get us from point A to point B are too. Mr. Han can’t catch a fly with chopsticks. There is no “wax on, wax off” technique. Things are different this time around, making it fresh and fun. That is not to say that those memorable elements are absent – as there are many nods and throwbacks to those things – they are just new.
The Karate Kid starts off a little slow, but once Kung Fu enters the picture, it’s all “rock n’ roll” (yes, there is a brief explanation as to why it still has “Karate” in the title and not “Kung Fu”).

Little Jaden Smith – son of Will and Jada Pinkett Smith – has been good in other movies, but this time around he is great. Smith gives a lot to his performance, including matching the speed and skill of Chan (who also gives a noteworthy performance) in several scenes. His fantastic physical commitment matches the heightened level of emotionality he gives.