A nostalgic feel-good movie with some minor life lessons and huge laughs. Made for linklater fans and anyone looking for some '80s nostalgia.

Rated R for language throughout, sexual content, drug use and some nudity. 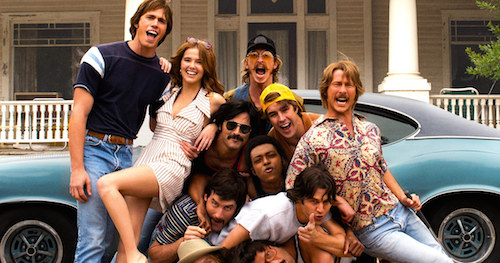 No one has made a bigger career out of slackers than director Richard Linklater. Considering it was the title of his first film, it should come as no surprise. From there he’s brought us all kinds of tales of deadbeats — Dazed and Confused, School of Rock, and even Bad News Bears — the man just gets the laid back culture. But he’s not all slacker attitude. He’s also delivered one of the best romantic trilogies (Before Sunrise, Before Sunset, and Before Midnight) and dabbled in the studio system (The Newton Boys, School, and Bears), he’s also been nominated for five Oscars.. The man knows how to bring his indie sensibility no matter the project. And now, he’s returned to his roots in Everybody Wants Some!! which feels like a sequel to both Dazed and Boyhood.

It’s three days before first day of class for Jake (Blake Jenner) as he pulls up to his assigned frat house of fellow baseball players. Being a pitcher makes everyone instantly standoffish. His fellow ballplayers include an allotment of characters with Finnegan (Glen Powell), Plummer (Temple Baker), Dale (J. Quinton Johnson), Beuter (Will Brittain), McReynolds (Tyler Hoechlin), Roper (Ryan Guzman), and it wouldn’t be complete without a wildcard, Jay (Juston Street), and the token pothead, Willoughby (Wyatt Russell). It’s fall 1980 in Texas, and together, the team will make self discoveries, with Jake possibly learning a few love lessons in the form of Beverly (Zoey Deutch).

The film gets off to a rickety start as we meet all the characters, but it’s not hard to keep up with who’s who. Jenner makes a fantastic lead with a huge smile and charm to spare. The supporting characters all get their moments to shine — although the best belong to Powell, Johnson, and Hoechlin. The romantic subplot surprisingly plays a bigger part in the trailer than it does in the actual film, but Deutch — daughter of Lea Thompson and director Howard Deutch — manages to steal every scene she’s in. Linklater never misses an opportunity to mix highbrow with lowbrow philosophizing in his characters. Just because they’re jocks doesn’t mean they have to be dumb.

In the end, Everybody Wants Some!! may feel like just another slice-of-life picture, but by now you know you can always expect more from the reliable Linklater. It’s a nostalgic feel-good movie with some minor life lessons and huge laughs. Sometimes that’s all it takes and all we really need when we go to the movies. And on that front, Everybody towers in every category.