Genuinely endearing, Egerton soars! Made for fans of underdog stories or anyone looking for something a little quirkier from the same old biopics.

Rated PG-13 for some suggestive material, partial nudity and smoking. 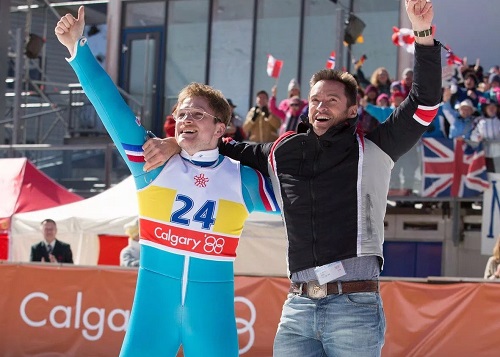 I’m a great example of how far the apple can fall from the tree. My grandpa was a skier, my dad and his two brothers skied, my own two brothers both ski, and then there’s me. I love movies. That could be just a small part of why I enjoyed Eddie the Eagle, about a ski jumper in the 1988 Olympics, as much as I did. There must be some tiny seed planted in there, right? Admittedly, I’ve only ever been skiing once. And I spent the entire time hanging out at the ski lodge eating McNuggets. Athletic I am not. Fan of a good underdog story? You bet I am! And so it came to be that Eddie manages to be not just a crowd pleaser, but also a damn fine bit of entertainment to boot.

We meet young Michael “Eddie” Edwards in 1973 with dreams of grandeur and a lunch box full of broken glasses. His mother (Jo Hartley) loves her dear Eddie and encourages him at every turn while his working-class father (Keith Allen) wants him to throw in the towel and join the family business. But Eddie — played as an adult by Taron Egerton — will never stop pursuing his destiny of becoming an Olympic athlete. Eventually, he packs up a bag and heads off to Germany to train, much to the chagrin of fallen from grace Bronson Peary (Hugh Jackman). Now, Eddie must try to win over Peary to teach him how to be the ski jumper only he knows he can be, while Peary just wants to keep him from breaking his neck.

As with all true stories, there’s no bother trying to wiggle around spoilers. Eddie quickly becomes known as “Eddie the Eagle” at the 1988 Olympics and the biggest phenomenon of the entire games. Director Dexter Fletcher may be more familiar for being in front of the camera, but his love for Eddie shines through in every scene. Combined with Jackman, Egerton carries the entire weight of the film on his shoulders, proving that he’s more than the Kingsman we all know and love. Screenwriters Sean Macauley and Simon Kelton also make smashing debuts, keeping the film bouncing along as infectiously as the grin on Eddie’s face.

Thankfully, Eddie never becomes a caricature and the film doesn’t get bogged down with dramatics. Eddie himself has a self deprecating demeanor which goes a long way in keeping the audience along for the ride. Eddie the Eagle is a smashing good time for all, with Egerton in particular giving a fantastic performance. While you may already know the story, it’s fun to see how it all came together. Inspiration is at full throttle making Eddie one of the most fun movies of the year so far!