Loses points in the dialogue department, but more than makes up for it with astounding visuals and filmmaking. Made for fans of the Herbert classic, sci-fi fans, and anyone looking to finally get the taste of the David Lynch film out of their mouth.

Rated PG-13 for sequences of strong violence, some disturbing images and suggestive material. 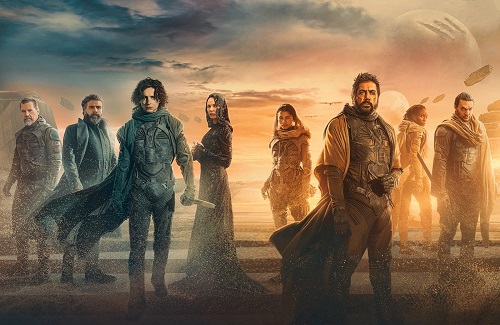 Having never read the Frank Herbert novel, nor seen the 1984 David Lynch film, I walked into Denis Villeneuve’s Dune cold. I may not fully understand most of what happened, but I can say: It. Was. Epic. Throttled with mumbled dialogue, the uninitiated will have a hard time figuring out exactly what’s going on. However, there’s an old saying that you should be able to watch most films without sound and still be able to follow the basic plot. And on that front, Villeneuve has crafted a huge success. Find the best seat in the biggest and loudest theater, and just let the film wash over you. You won’t be able to craft a coherent synopsis once the credits roll, but you will absolutely be entertained.

In the year 10191, Paul Atreides (Timothee Chalamet) is having dreams about the planet Arrakis and a blue eyed woman (Zendaya). Soon enough, his dreams become prophecies when House Atreides — under the rule of Duke Leto Atreides (Oscar Isaac) — is tasked with command of the planet Arrakis. Arrakis is home of the Fermen and the coveted “spice” — an element that not only provides incredible health, and makes space travel possible — but also to the deadly sandworm. Atreides is attacked by order of Baron Vladimir Harkonnen (Stellan Skarsgård), led by Beast Rabban (Dave Bautista), and House Atreides — including Paul’s mother, Lady Jessica (Rebecca Ferguson), and faithful fighters Duncan Idaho (Jason Momoa) and Gurney Halleck (Josh Brolin) — are on the run for safety.

Regardless of whether one can make heads or tails of the plot never matters while watching Dune. Villeneuve has slathered the screen with slavish to the book details in the biggest manner possible. While available for home consumption on HBO Max, Dune is indefinitely an IMAX stunner. Greig Fraser’s cinematography is sometimes so clear, and filled with so much depth, that you could feel like you’re about to fall into the screen at times. Hans Zimmer’s score isn’t exactly his best, but combined with the audio effects, it rocks the theater. At times, feeling as if you were watching the film in a D-Box chair.

Some have been trying to say that Dune is “Star Wars for adults,” but with how much better sci-fi/fantasy is now, can’t we geeks have our cake and eat it too. There’s plenty of room for both. After all, Herbert’s novel was published 12 years before George Lucas’s space opera borrowed heavily from it. The cast are all fantastic — when you can hear what they say at least — and it’s going to be interesting to see how they fare in Part 2 with the book appropriately cleaved in half. Hopefully we n00bs get a better understanding of what spice is and how it works, and I’ve heard the second half is where the book really kicks into high gear. It’s going to be a long wait, but if “Part Two” promises a potentially even better film, it’ll be more than worth it.