Better than the original, but that's setting the bar mighty low, HBO Max is the only way to go. Made for fans who have forgotten how brilliant the classic 'Looney Tunes' were and sports fans who just wanna watch some sportsball.

Rated PG for some cartoon violence and some language. 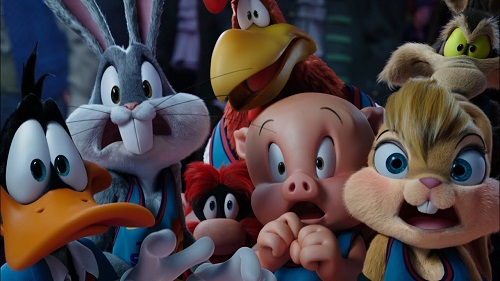 Sequel, remake, reboot. Space Jam: A New Legacy wants to have it all, and yet has no idea what it really wants to be despite 25 years to come up with something. It’s never a good sign when a film has a lot of credited writers — this one has six. While I was hoping I could cut it some slack considering it’s a family film, all it does is show that this second Space Jam entry seems to have been written — and rewritten — exhaustively. Star LeBron James makes the most of his on-screen presence – something we already knew he had after his hilarious turn in Judd Apatow’s Trainwreck. He’s both helped, and hindered, by his cartoon cohorts. While it may be amazing to see Wile E. Coyote and Roadrunner edited into Mad Max: Fury Road, these kinds of intellectual property gags begin to wear out their welcome fast.

LeBron (who, like Michael Jordan in the original, is playing a semi-fictionalized version of himself), has grown up to be the NBA all-star we all know in real life. Warner Bros. may have come calling to use his likeness in everything they own through a new program called “Warner 3000,” what no one knows is that it’s created by a diabolical AI algorithm going by the name of Al G. Rhythm (Don Cheadle). While this offer has piqued the interest of his son, Dom (Cedric Joe), LeBron thinks it’s ridiculous and walks away. Al G. decides to take matters into his own hands and transports LeBron and Dom into the WB “serververse” and threatens to keep Dom trapped inside forever, challenging LeBron to a basketball game to save them both.

Now, LeBron is in a race against time to scramble together a team of WB IP to save Dom, leading him to wind up with our favorite Looney Tunes: Bugs Bunny/Sylvester/Yosemite Sam (all voiced by Jeff Bergman), Daffy Duck/Porky Pig/Elmer Fudd/Foghorn Leghorn (all voiced by Eric Bauza), Lola Bunny (voiced by Zendaya), Tweety (voiced by Bob Bergen), Tasmanian Devil (voiced by Fred Tatasciore), Speedy Gonzalez (voiced by Gabriel Iglesias), Granny (voiced by Candi Milo), and Road Runner (voiced by Paul Julian). Meanwhile, Dom uses his own computer skills to suck the likes of Klay Thompson, Anthony Davis, Damian Lillard, Diana Taurasi, and Nneka Ogwumike into the serververse as Goon Squad versions of themselves.

Space Jam: A New Legacy bounces around the rim, but never scores. Cheadle works in overdrive to keep the momentum going — and all of our favorite Tunes are as loveable as ever — it just never gels to a cohesive whole. The Goon Squad characters are even more obnoxious and forgettable than in the first film, and once it kicks into Ready Player One territory, the WB IP sideline gawkers become super annoying to watch. They’re all just standing around playing lookalikes as if they’re rejects from a haunted house. Admittedly, King Kong does get to be a fun punchline, then a Michael Jordan joke falls flat on its face.

It’s the kitchen sink effect in action, and yes, when you’re watching a Looney Tunes flick, you know you’ll laugh at some point. But at nearly two hours, everything is stretched to the breaking point, making the pause button mighty handy if you’re watching at home. While you might not miss anything important if you have to make a potty break in the theater, this is family fare much better suited for home consumption. Ironic for a movie that’s trying so hard to beat you over the head with its theatricality and endless IP parade. In the end, Space Jam: A New Legacy is just another play-by-numbers sports comedy, and sadly, the Tunes are better than this.