Lacking thrills and fright, it is "Devil's" decent story that keeps it afloat. Made for people who enjoy mild PG-13 horror movies and those who still think M. Night hasn't lost it.

Rated PG-13 for violence and disturbing images, thematic material and some language
including sexual references. 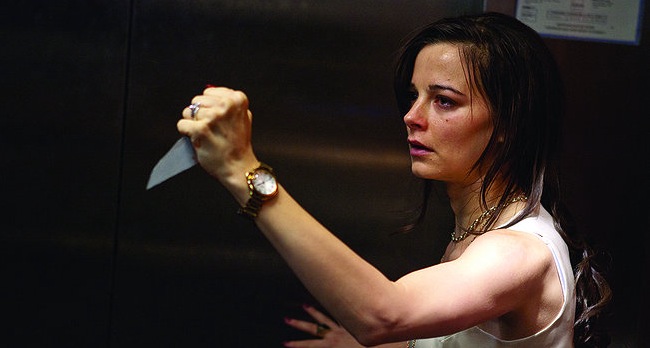 While producing and directing his own screenplays doesn’t seem to be working out well for him, M. Night Shyamalan (The Sixth Sense) is in the process of producing three of his own original supernatural thriller stories adapted into feature-length films directed by up-and-coming directors of that genre. John Erick Dowdle (Quarantine) directs the first of “The Night Chronicles,” Devil.

Devil is voiced over by a superstitious religious man explaining folklore stories about the devil damning souls. As the old tale tells, it all begins with a suicide, paving the way for the Devious One to drag more souls to hell. There is always a group of unsuspecting, seemingly harmless victims that end up stuck together. One by one, they are all killed and the last victim is always killed in front of the person he loves the most. Innocent bystanders are also killed along the way for trying to get between the devil and his prey. Those spectators who witness the event are chosen to be there for a reason.

The movie opens with a Happening-esque suicide, followed by the introduction to our central character, Detective Bowden (Chris Messina, Away We Go) of the Philadelphia police department. Bowden and his partner have been sent out to investigate the suicide case. We quickly learn of his tragic past – his wife and child were killed by a drunk driving hit-and-run a few years ago. He is one of the spectators.

As Detective Bowden enters the building where the suicide took place, five strangers enter elevator 6 of a the downtown skyscraper and quickly end up trapped in the most terrifying scenario of their lives. After the express elevator unexplainably breaks down and becomes stuck in the middle of the shaft, bad things start happening. People start dying. One of the passengers is the devil and the other four are his victims. The situation only worsens as panic and paranoia set in, not knowing who is good and which is the devil.

While Devil is better than you would expect from a Shyamalan story (considering his last few films), it still isn’t that great. The twist is typical of the horror movie genre and the road leading to it doesn’t quite capture the reality of the terror at hand. Never once do you get a tense, freaked-out feeling as if you were stuck in that tiny room with the devil.

Aside from the mediocre reveal, the ending is less than predictable and fairly original, playing off more like a thriller than the horror movie it is being advertised as. While it will not be widely accepted with positive reviews, Devil will play out well with the PG-13 audience.

Nothing but rumors have spread about the second and third Night Chronicles. The second is supposedly called Reincarnate and will be directed by The Last Exorcism director Daniel Stamm, while the third is said to be based on Shyamalan’s story from the never-made Unbreakable sequel.