Succeeding where others have failed before, 'Deadpool 2' manages to out-Deadpool the first! Made for fans of the first film. If you were offended by that one, you ain't seen nothin' yet. 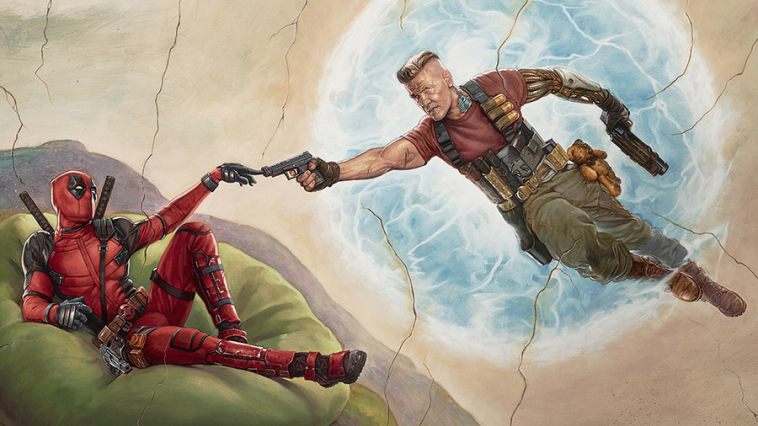 With Deadpool becoming not just the second highest grossing R-rated feature domestically, but the highest grossing X-Men film, expectations are high for Deadpool 2. Well have no fear, Wade Wilson is here to cleanse our saddened Infinity War palettes and satiate our appetites with everything we love about Deadpool.

Deadpool may be a comic-based action film, but it’s a comedy at heart. And there’s no genre harder to make a sequel for. Leave it to Deadpool & Friends to find a way. Our favorite “Merc with a Mouth” is back and he’s brought some new friends with him to ensure maximum effort across all fronts.

Fifty years in the future, a mutant named Russell (Julian Dennison) will kill Cable’s (Josh Brolin) wife and daughter. In the present, Cable has time traveled back to stop Russell. Meanwhile, Wade (Ryan Reynolds) must do whatever he can to stop Cable from killing Russell with the help of his X-Force — Bedlam (Terry Crews), Shatterstar (Lewis Tan),  Zeitgeist (Bill Skarsgard), Domino (Zazie Beetz), and Peter (Rob Delaney) — along with Colossus (voiced by Stefan Kapičić), Negasonic Teenage Warhead (Brianna Hildebrand), and even Dopinder (Karan Soni).

For those of you who liked the first Deadpool, you’re gonna love Deadpool 2! This is director David Leitch’s best film yet — quite a feat when you’re following up John Wick and Atomic Blonde. Leitch — along with returning writers Rhett Reese and Paul Wernick, joined by Ryan Reynolds this time — deliver on all fronts. They even manage to subtly set up the X-Force spin-off without shoving it down our throats.

Reynolds continues to prove Deadpool is the character he was born to play. Brolin kills it as Cable while Dennison continues to be a hilarious star on the rise after his turn in Hunt for the Wilderpeople. Beetz is a scene stealer and needs her own movie.

This is the sequel we deserve and it’s nice to see Marvel and Fox didn’t jump the gun and phone it in. The marketing for the film has gone balls out too. Look no further than the Celine Dion video for the Oscar bait song, “Ashes” and a glutton of 7-11 items ranging from Slurpee to Trolli Mini Hands.

Deadpool 2 also has a better tone than the first. After rewatching the original over the weekend, it feels more mean-spirited and nihilistic whereas the sequel is even more fun. It also features one of the best opening and closing credits sequences ever! Don’t worry, this is pure Deadpool cranked up to 11. Gleefully profane and even more self-aware than the original, this is the Deadpool we know and love. The jokes are funnier, the gore is gorier, the big is bigger, and the meta is metaier.