Way more adult-oriented than family-friendly, but thankfully without all the puppy murder. Made for adults who have sat through the original animated classic too many times to count.

Rated PG-13 for some violence and thematic elements. 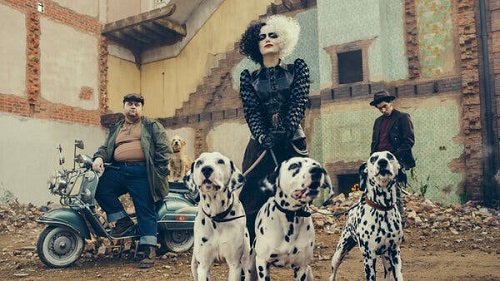 Audiences may find themselves perplexed with the approach taken with the live-action Cruella. While they’ve always flaunted the fact that it would be an origin story, it’s way more adult-oriented than family-friendly. Some have called it “Joker meets Devil Wears Prada” I’d go with “The De Vil Wears Prada” since the two are so similar — more on that in a minute.

Emma Stone’s Cruella is a far different beast from the beloved dog-coat-wearing chain-smoker of the original animated One Hundred and One Dalmatians. Or even the megalomaniac sociopath Glenn Close gave us twice. But, it’s all for the best, as I’m not sure how well that would go over in a live-action film in this day and age.

Thankfully, director Craig Gillespie is best known for his wicked sense of humor (see Lars and the Real Girl, the underrated/underseen Fright Night remake, and the Oscar-winning I, Tonya), so perhaps some of the tonal shifts boils down to the shooting script courtesy of Oscar-nominated Tony McNamara (The Favourite) and hit-and-miss rom-com enthusiast Dana Fox (The Wedding Date, What Happens in Vegas, Couples Retreat, How to Be Single, Isn’t It Romantic). It feels almost like  a Devil Wears Prada remake, which makes sense since Cruella co-writer Aline Brosh McKenna also penned The Devils Wears Prada.

Cruella introduces us to the young Estella (Tipper Seifert-Cleveland) as she deals with being a troublemaker at school and a split personality — yes, the other half is “Cruella.” Eventually, Estella is expelled removed by the Headmaster her mother, Catherine (Emily Beecham) and the two hit the road to London. A pitstop is in order though, with her mother swinging by to see the mysterious Baroness (Emma Thompson), only for her mother to fall to her death after being attacked by a pack of dalmatians on the hunt for Estella after she crashes a fashion show.

Poor Estella is on her own in London, but not before she crosses paths with Jasper (Ziggy Gardner) and Horace (Joseph MacDonald), and the trio grow up to be thieves and con artists (now played by Stone, Joel Fry, and Paul Walter Hauser). It isn’t long after Estella tries to straighten up and fly right when old tendencies come calling after the Baroness spots her drunken fashion shenanigans in a department store window and hires her, quickly becoming her right hand (wo)man. Soon enough, Estella’s alter-ego “Cruella” begins to take over and a cold dish of revenge is set into motion after Estella begins to learn a few details from her past that may be even more twisted than she is.

What Cruella really boils down to are two things, and they’re both marvelous: Stone’s performance and Jenny Beavan’s immaculate costume design. Stone — and Thompson — are having so much fun, but Stone especially, feels like she was born for the role. It helps that she’s an executive producer so she was probably able to have more say and help get the character an actual arc, rather than just being yet another Disney villain. As for Beavan’s costumes, there’s no way Cruella won’t see a nomination come awards season, and it’s going to take quite a turn of events for it to lose.

Two things audiences may find annoying — or not, had I bothered to point it out — are the song choices and Hauser’s cockney accent. A colleague referred to the soundtrack as a case of “on-the-nose jukebox,” and while he may be right, it certainly ensures the tone to be as playful as you’d hope and includes all the ’70s earworms you’d expect from a period piece. Considering the film is full of murder and chaos and dialogue, it will likely bore young children to tears.

Cruella is definitely for the adults, and thankfully so. It’s a grand time for us, especially after having to slog through the likes of Dumbo, Beauty and the Beast, Alice Through the Looking Glass, Christopher Robin, and not just one, but TWO! Maleficent films. It’s our turn to cut loose and have some fun. For families, there is the option of paying to watch it on Disney+ Premium, but for everyone else, it’s definitely worth a trip to the theater to see the costumes and performances where they’re meant to be, up on the big screen and larger than life.