Rated R for language, sex references and some nudity. 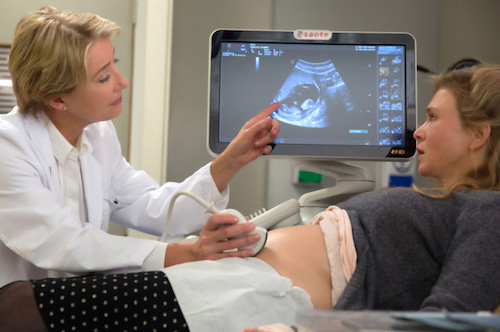 It’s been 15 years since Bridget Jones’s Diary arrived in theaters with its hilarious and heartbreaking mixture. With the help of Richard Curtis (Love Actually, About Time) and Andrew Davies, Helen Fielding’s titular Bridget won over audiences worldwide. While the casting of Renee Zellweger was a left-field choice, she threw herself into the misadventures with aplomb. It was only a matter of time before a sequel came along and three years later we were assaulted with the terrible Edge of Reason. Never proving its existence with critics or audiences, it took another 12 years for original director Sharon Maguire and Helen Fielding to team up with Zellweger yet again for Bridget Jones’s Baby. Worth the wait it was not.

Throwing continuity out the window, with Bridget crashing her way through her 43rd birthday. She may have a fantastic job where she loves her co-workers — especially her BFF Jude (Shirley Henderson) who decides to take her to a weekend rave to make up for having run into Mark Darcy (Colin Firth) at Daniel Cleaver’s (Hugh Grant) funeral. On said excursion, Bridget winds up in the wrong tent and sleeps with mystery man Jack (Patrick Dempsey). A few days later, she winds up sleeping with Mark also. Now, Bridget finds herself in the biggest pickle of her life after she realizes she’s pregnant and has no idea who the father is. Aw-shucks, hilarity tries to abound.

I suppose there should be something refreshing about a film based around a woman trying to have her cake and eat it too. It’s just that director Maguire is stuck with Fielding’s rambling screenplay. You would think that being co-written by Emma Thompson would make things more palatable, but there’s a threeway tug-of-war happening between Fielding, Thompson, and additional screenwriter Dan Mazer (frequent Sasha Baron Cohen collaborator: Da Ali G Show, Borat, and Bruno). Some of the jokes will leave a bad taste in your mouth, even if they might hit a little close to home.

Thankfully, Maguire has a lot of returning cast members on hand — Gemma Jones, Jim Broadbent, Sally Phillips, and James Callis — to at least make things feel more homey. But it’s too little too late and almost none of the original’s charm is left. If this happens to be the last we see of Bridget Jones, at least she gets what she deserves.