Boring and way too slavish to be entertaining. Made for dahl's biggest fans and anyone hopped up on caffeine. 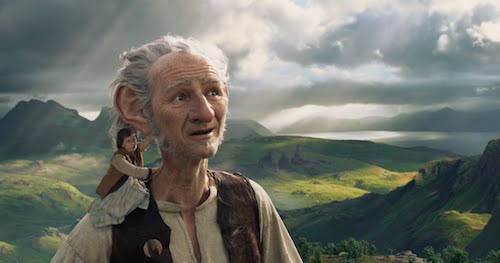 If there’s one director that pains me to write a not-so-great review for, it’s Steven Spielberg. The man is a legend; directing so many amazing films, including my all-time favorite, Jaws. But not every director is infallible, so it comes as even more of a disappointment that his first collaboration with Disney is so underwhelming. Roald Dahl’s beloved children’s tale, The BFG, looks like a no-brainer on paper. It is with great sadness that I must report that The BFG is just another addition to this summer’s heap of boring outings.

Sophie (Ruby Barnhill) is an orphan living in London. She’s always annoyed with how horribly the orphanage is run, making sure to keep the doors locked and the lights out during the night. She reads in bed with a flashlight when she’s not threatening to call the coppers on the local drunks. On this particular night, she meets our titular character “Big Friendly Giant” or “BFG” (Mark Rylance) and he whisks her away for a night of never-ending, snooze-inducing conversation amongst the land of giants. There, she sees that BFG is bullied by the even bigger giants — Bloodbottler (Bill Hader) and their leader Fleshlumpeater (Jemaine Clement) — and together, they form a plan involving The Queen (Penelope Wilton) to put a stop to the bullying.

And that’s about it. There is absolutely no more plot than that, folks. A colleague informed me that the film is extremely faithful, which makes me glad that Charlie and the Chocolate Factory was the only Dahl book I read as a child. The excitement, weirdness, or even the underlying darkness, are nowhere to be found thanks to Melissa Mathison’s (The Black Stallion, E.T., The Indian in the Cupboard) plodding screenplay. With Spielberg directing, there is at least one gee-whiz moment when the giants are exploring BFG’s house, but it’s all for nothing when it’s all leading up to two, count ’em, two fart gags. If only the rest of the movie was as much of a gas as Spielberg clearly thought these two scenes are. Even John Williams seems to be sleepwalking his way through the score. Such a shame that movies — especially with a Williams score — don’t have themes anymore. It’s something sorely lacking from today’s filmmaking.

Considering the film moves at a snail’s pace, you’ll be lucky if you even make it to the scenes involving The Queen. The BFG is not being forecasted to have a big opening weekend, so Spielberg will have to rely on the worldwide box office to help make Disney their money back. I know they can’t all be winners — even being graced with the monikers of Disney and Spielberg — unfortunately, The BFG will be long forgotten after the onslaught of summer movies continues marching on.