A wickedly hilarious generational slaughterhouse of fun. Made for slasher/whodunnit fans or anyone else who enjoys a good ol' A24 bloodbath. 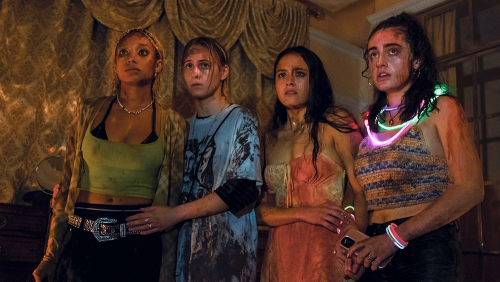 Aside from horror, the genre best suited for a communal experience is comedy. When the chance to enjoy a new horror comedy comes along, you can bet I’ll be there. While Bodies Bodies Bodies may not be the funniest horror movie, it more than makes up for it in dialogue and claustrophobic atmosphere. Director Halina Reijn and writer Sarah DeLappe may not be trying to reinvent the genre, but they definitely know how horror movies work. Reijn goes for broke, not just throwing Gen Z under the bus, but driving over them with gleeful abandon.

Bee (Maria Bakalova) and Sophie (Amandla Stenberg) are headed to a secluded mansion to surprise their friends with a surprise hurricane blowing through, secluding everyone inside. There’s a stranger amongst them in Greg (Lee Pace) — Alice’s (Rachel Sennott) latest fling — but that doesn’t stop them from firing up a game of “Bodies Bodies Bodies” — where things go from bad to worse after David (Pete Davidson) gets his throat slashed for real. Now, everybody’s a suspect, including David’s girlfriend Emma (Chase Sui Wonders) and Jordan (Myha’la Herrold), who harbors some very intense feelings about her past relationship with Sophie. Now, the game is real, and the bodies start piling up, with the group setting out to discover who the killer is for real.

Setting the film in an overnight scenario works wonders to heighten the tension, helped also by its short runtime. Reijn keeps things moving at a fast pace, while also finding plenty of room to let the cast wallow in DeLappe’s hilarious screenplay. Bakalova continues to show she’s more than just Borat’s daughter with a nuanced performance as the character with the least amount of lines. Stenberg also manages to give Sophie some real choices as a former addict stuck in the worst situation imaginable at a drug fueled party with her closest friends. But it’s Herrold and Sennott who steal the movie.

There was a point about halfway through, where I had a split second thought about where the film was headed — due to having seen one very specific ’80s movie way too many times — but I didn’t dwell on it because I wanted to see where it wound up. Bear in mind, Bodies Bodies Bodies is not your typical slasher feature, it does owe way more to the whodunnit class, along the lines of the Scream franchise, where you’re trying to figure out who the killer is more than just waiting to see who the next person to drop is — and how. Bodies Bodies Bodies is a fantastic way to end the summer, filled with tons of surprises, hilarious performances, a killer twist, and another well deserved notch on A24’s belt.