Hilarious and good-natured, never mean-spirited. Made for friends looking for a good reason to head out to see a film about themselves.

Rated R for language throughout, crude sexual content, drug use and brief nudity. 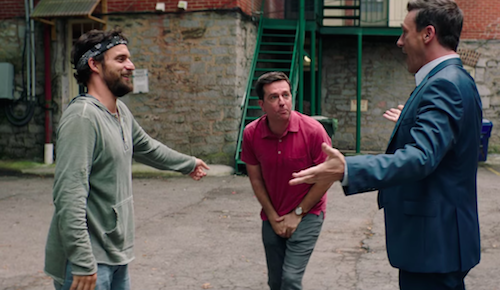 It’s not hard to keep friendships alive, sometimes a quick text can be enough to maintain a friendship. In 2013, The Wall Street Journal brought attention to a group of friends who have been playing a game of tag for 23 years. Leave it to Hollywood to give them their own movie. With the real life shenanigans sounding every bit as fun as what’s in Tag, it’s the kind of story that was begging for its own feature. And while the casting may look like a mixed bag on paper, director Jeff Tomsic made sure everyone — including the supporting cast — has the kind of rapport any good comedy should have.

Hoagie (Ed Helms) has just taken a new position as a janitor — perfect cover to sneak in and tag his best friend Bob (Jon Hamm). Turns out, Bob is in the middle of an interview with Wall Street Journal journalist Rebecca Crosby (Annabelle Wallis). She may have been there to interview Bob regarding the success of his company, but now she’s tagging along to scoop out a bigger story. Hoagie and Bob belong to a group of friends — including Chilli (Jake Johnson) and Sable (Hannibal Buress) — who still play tag. But Hoagie comes bearing bad news: Jerry (Jeremy Renner) is getting married and quitting the game for good. Jerry has never been “it” and now everyone is out to get him before they lose their opportunity forever.

Tomsic keeps the pace chugging along at a frantic pace as the group comes together. Also joining in is Anna (Isla Fisher), Hoagie’s hilariously foul-mouthed wife. Leslie Bibb steals some laughs as Renner’s bride-to-be with Rashida Jones being delegated to a love triangle with Bob and Chilli. And Renner proves he can be supercool and not just a Bourne ripoff or Hawkeye. This is the best comedy ensemble since Game Night.

Screenwriters Rob McKittrick and Mark Steilen fill the script with some huge laughs and Tomsic makes a surprisingly sweet-hearted debut. Tag  may be inspired by a true story, it’s also inspiring itself. A coworker told me this week that he and his closest friends have had their own game going for the last two years. It’s just further proof that Tag is worth heading out with your closest friends. It’s a huge crowd-pleaser and makes Warner Bros. 2-0 in this year’s comedy game.