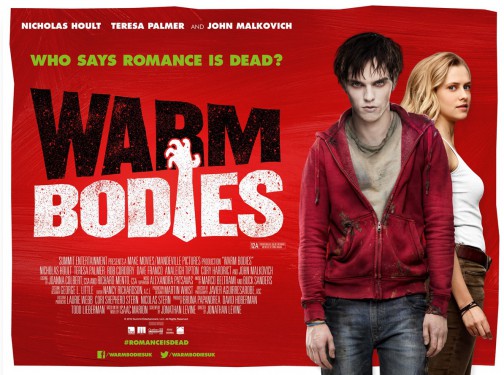 A funny new twist on a classic love story, WARM BODIES is a poignant tale about the power of human connection. After a zombie epidemic, R (a highly unusual zombie) encounters Julie (a human survivor), and rescues her from a zombie attack. Julie sees that R is different from the other zombies, and as the two form a special relationship in their struggle for survival, R becomes increasingly more human – setting off an exciting, romantic, and often comical chain of events that begins to transform the other zombies and maybe even the whole lifeless world.

The Reel Place is excited to be giving out passes for an advance screening of the film taking place on Monday, January 28 at 7PM in Salt Lake City, Utah. Click here to download two printable passes for this special screening. You will need to be registered with ticketing site Gofobo in order to obtain passes. Registration is absolutely free and comes with the added bonus of receiving email invites to other advance screenings. To ensure that the theater fills, more passes are given out than the theater can accommodate, so be sure to arrive extra early in order to exchange your passes for actual tickets. No cell phones will be allowed in the theater.

Thanks for getting your passes from The Reel Place and we look forward to seeing you at the screening. Be sure to check out the trailer below, as well as the first four minutes of the film!