Too serious to be a true comedy, while never as funny either. Made for adults with the most juvenile sense of humor. 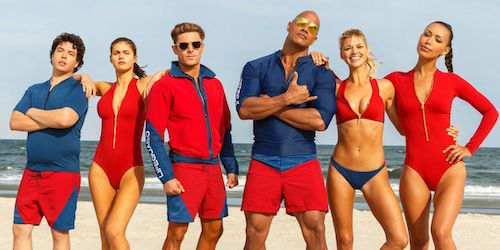 Have you heard the one about the two-hour dick joke? Oh, you don’t want to? Well then I can assure you Baywatch is not for you. For anyone else, there is some fun to be had, even if director Seth Gordon careens wildly from tone to tone. Never knowing whether to take the material seriously or not — it shouldn’t — the film yearns to be another Jump Street, but only winds up merely better than CHIPS. The cast may be  having more fun than the audience, but the few laughs to be had are few and far between.

Lt. Mitch Buchannon (Dwayne Johnson) loves his beach of Emerald Bay, Florida more than anything. Aside from your safety. He takes his role as lead lifeguard very seriously and expects nothing but the best from his fellow crew. Leave it to newbie Matt Brody (Zac Efron) to throw a wrench in his spokes the day of tryouts for new recruits. Mitch hates Brody’s two gold medal-winning former Olympian’s entitlement thrust on him by Captain Thorne (Ron Huebel). Mitch has his eyes on the enthusiastic, but out-of-shape Ronnie (Jon Bass) who has a crush on lifeguard C.J. (Kelly Rohrbach), and over achiever Summer (Alexandra Daddario).

The three new recruits have arrived just in time for drugs to wash up on Mitch’s beloved beaches with all signs pointing to Victoria Leeds (Priyanka Chopra), owner of the Huntley Club, who’s been buying up local real estate as a what Mitch assumes is a front for drug smuggling. Now, the motley crew must band together to prove Mitch’s hunch, while trying not to step on the toes of local cop Garner Ellerbee (Yahya Abdul-Mateen II) and keeping the Captain off his back.

Considering the amount of funny folks behind the scenes of Baywatch — the director, story creditors Thomas Lennon and Robert Ben Garant from Reno 911, producer Ivan Reitman, the reliable cast — the film should be way funnier than it is. The biggest culprit is Damian Shannon and Mark Swift’s tone deaf screenplay. The pair’s biggest celluloid contributions are Freddy vs Jason and the Friday the 13th reboot. Both are far more entertaining than this. Abruptly shifting from over the top to melodramatic, the cast can barely keep up. Gordon can hardly make an exciting action sequence, and a lot of the joke build up falls flat on its face.

The cast is the best part and do their best with what they’re given, but this feels like one of the most scripted comedy in years. Not a good thing. While there are moments when the cast improvs a little, there’s a lot of time wasted on plot. Even Rohrbach is hilarious in spurts. The saddest part is that they don’t even truly embrace the R rating. The only reason for the rating is an overindulgence of f-bombs and a scene involving a corpse and its penis.

It’s too bad Baywatch didn’t go full throttle and capture the hilarious start — the opening scene is by far the funniest — so don’t let the moment get you too excited. It may not be a complete failure, but it never tries to be anything better than what we get. Let’s put it this way, there’s a character named Brody who spends a lot of time on the beach and in the water, and there’s not one Jaws joke. Even The Fate of the Furious let Johnson make a Jaws joke. When it comes time to sink or swim, Baywatch flails for safety, but at least it’s never dead in the water.