The Fate of the Furious

Keeps the franchise just fresh enough to usher in a new chapter for the gloriously over-the-top series. Made for 'Fast and Furious' fans of course! We know who we are.

Rated PG-13 for prolonged sequences of violence and destruction, suggestive content, and language. 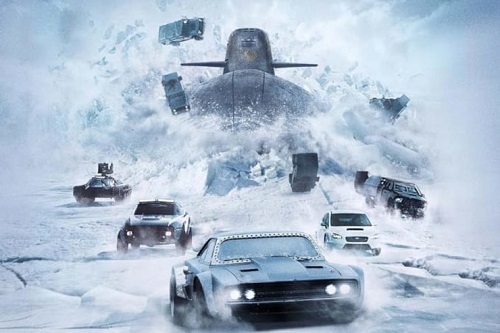 If there’s any franchise embracing its evolving lunacy, it’s The Fast and the Furious. With a new director comes new levels of redonkulous. With the passing of the baton from Justin Lin to James Wan and now F. Gary Gray, the series continues to show no signs of waning. Everything just keeps getting bigger, crazier, and even more physics-defying. It’s exactly what we fans want and The Fate of the Furious — or as it should be titled: The F8 of the Furious — delivers in spades.

If you want convoluted, never fear, writer Chris Morgan — singlehandedly responsible for the “screenplays” since Tokyo Drift (part 3) — has you covered! A cold opening finds Dom (Vin Diesel) and Letty (Michelle Rodriguez) honeymooning in Havana — finding time to win a car race while driving backwards and the car on fire, no less. Soon enough, the maniacal Cipher (Charlize Theron) inspires Dom to turn his back on the family for reasons only he’s allowed to know.

Treason erupts after the crew — Roman (Tyrese Gibson), Parker (Ludacris), and Ramsey (Nathalie Emmanuel) — are brought together by Hobbs (Dwayne Johnson) to collect an EMP in Berlin. After Dom makes off with the device, Hobbs is captured and thrown in prison where Mr. Nobody (Kurt Russell) and his new righthand man Little Nobody (Scott Eastwood) try to recruit him to go after Dom who is working for Cipher. The two are on the hunt for — wait for it — nuclear launch codes from the Russians. Meanwhile, the prison stint forces Hobbs to work alongside his archnemesis Deckard (Jason Statham).

The Fate of the Furious is turn your brain off and ramp your testosterone levels to 11 entertainment of the highest order. One liners abound while each action sequence tries to outdo the previous. With the passing of Paul Walker, you would think that having fewer characters would help Morgan keep the shenanigans a little tighter. Instead, everything is bloated to a standard two hour-plus runtime with some major characters making surprise appearances. One of which is so unnecessary you forget they were even in the movie until you try to remember what happens to them.

I was a little worried with Gray taking the reins to be honest. The man has made some horrible films in the past — Be Cool and Law Abiding Citizen being the worst offenders — but this is at least his fourth best film yet. Straight Outta Compton and Friday are his best. But looking over his IMDB page you’ll see he’s at least worked with some of the crew before. And the gang’s mostly all here! It’s still horrible about Walker and his presence is missed. The beating heart has clearly been ripped from the center. All things considered, at least they found a way to keep the franchise moving along. This one ends on a cliffhanger which is no surprise since at least two more have already been announced.

Fans will find everything they love in fine form. Although, the two who work best together are The Rock and Statham. They seem to be the only ones in the cast who know how to fight and every time they’re onscreen together you can sense they’re having a raucous time working together. This should not come as a shock considering the highly publicized feud between Johnson and Diesel. But with Statham back in Transporter mode, facing off against The Rock and his ever-expanding biceps, you almost wish the film completely centered around them. As it stands, fans will revel in every gloriously nuckin’ futs minute.