Starts off interesting before completely nosediving as it bullrushes to the hilariously inept climax. Salt in the wound that this was released in theaters and 'Prey' wasn't. Way to go, Disney. Made for only the most forgiving horror fans or anyone who's never seen a horror movie before.

Rated R for some strong violence and gore, disturbing material, language throughout and nudity. 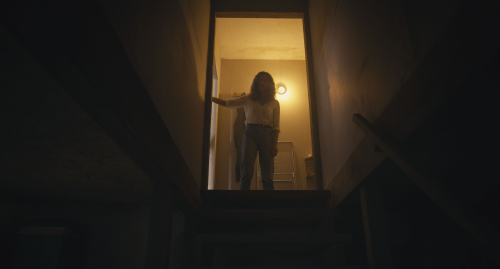 For those heaping praise upon writer/director Zach Cregger’s Barbarian: Have you never seen a horror movie? Not to say it can’t be fun when a movie revels in tropes and clichés — Scream built a whole franchise out of it — but it’s a whole other story when the film acts like it’s the first film to do so. Barbarian simply revolves around every character doing exactly what they shouldn’t. Not even from a horror movie aspect, just from life in general. Entering a hidden hallway in an already creepy basement? Check. Entering a hidden doorway at the end of said hallway, leading deeper underground? Check. Harkening back to Edgar Wright’s brilliant fake trailer, if you… are thinking… of seeing… this movie… DON’T!

Tess (Georgina Campbell) has just arrived at her Airbnb, only to find it already occupied by Keith (Bill Skarsgård). With Keith having arrived first, he agrees to let her come inside while they try to contact the rental company. Considering it’s a dark and stormy night, Tess reluctantly obliges. The two become acquainted and soon enough, Keith takes the couch with Tess taking the bedroom.

Soon enough, creepy happenings are afoot, and before you can say “loud noises,” Keith goes missing, and Tess sets out on the dumbest rescue ever to find someone she doesn’t know in the world’s creepiest basement. And this is all before AJ (Justin Long), the rental’s owner, arrives in an effort to liquidate assets after being accused of sexual assault. But things aren’t quite what they seem, and everyone soon learns that AJ’s house harbors more than just skeletons in its closets.

The ineptitude in the writing is baffling. While the film does try to play with the notion of gaslighting and toxic masculinity, it never does anything more with it than just casually uses it to get from the setup to the inciting incident. But, we also know that if Tess had used her head for even a second and left the premises, there wouldn’t be a movie. But that doesn’t excuse the rest of the shenanigans. Every single thing each character does gets dumber and dumber as the runtime plods on. Even the title doesn’t make any sense by the time the credits roll.

While Cregger does show a knack for setting up a creepy scenario — with the help of Zach Kuperstein’s admittedly fantastic cinematography — he has no idea what to do with it. Instead, Cregger just throws things at the wall to see what sticks. And then throwing in the towel once we get to the unintentionally hilarious climax. Skarsgård and Campbell do the best they can with their material and do play well off each other. The same can’t be said for Long, who overacts the whole time and is insanely miscast. For those looking for a reason to get out this weekend, and who like yelling at dumb people doing dumb things in dumb horror movies, you may find something to salvage from Cregger’s disaster. Anyone else, is best to just don’t.