Flashy in all the right ways, sets the bar mighty high for the upcoming summer season. Made for Marvel fans and those thirsty to see their favorite team reassembled.

Rated PG-13 for intense sequences of sci-fi action, violence and destruction, and for some suggestive comments. 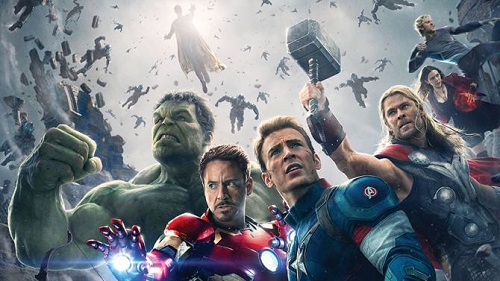 So here we are, three years later and after having read through my review of the first Avengers movie, I could pretty much copy and paste that review here — updating the title to Avengers: Age of Ultron of course. It’s pretty amazing that Joss Whedon has come back to assemble “Earth’s Mightiest Heroes” once again with stunning results. Fanboy backlash is bound to ensue. But yes, Whedon knocks it out of the park again. Does it top the first time we saw the titular characters Iron Man, The Incredible Hulk, Thor, and Captain America in their first team-up? It comes about as close as anyone else could ever get.

Opening with a stunning “single take” shot of our Avengers back in action, the team is invading a secret HYDRA research station in the snowy Sokovia mountains. On the hunt for Baron Wolfgang von Strucker (Thomas Kretschmann), their mission is to obtain Loki’s scepter taken after the battle of New York. Little do they know that HYDRA has been experimenting on siblings Pietro/Quicksilver and Wanda/Scarlet Witch Maximoff (Aaron Taylor-Johnson and Elizabeth Olsen). In a moment of clarity, Wanda allows Tony Stark (Robert Downey, Jr) to just take the scepter. Her plan winds up working better than expected after Tony uses the artificial intelligence hiding inside the scepter to initiate “Ultron,” a global defense system. Taking on a literal life of his own, the sentient Ultron (James Spader) begins to work some magic of his own, using the Maximoffs to try to implode the Avengers, sending them into disarray before a Vision (Paul Bettany) helps them make a final stand to thwart Ultron’s evil plan.

As with the first Avengers film, this is one massive lineup of characters and plotlines to keep track of. Let alone the ensuing internal whiplash the team faces with each other. Considering there’s already Iron Man/Stark (Downey), Captain America/Steve Rogers (Chris Evans), Thor (Chris Hemsworth), Hulk/Bruce Banner (Mark Ruffalo), Black Widow/Natasha Romanoff (Scarlett Johansson), and Hawkeye/Clint Barton (Jeremy Renner), they’re also joined by characters from their solo outings: Nick Fury (Samuel L. Jackson), War Machine (Don Cheadle), The Falcon (Anthony Mackie), Heimdall (Idris Elba), Erik Selvig (Stellan Skarsgård), and Maria Hill (Cobie Smulders). Then there’s the new characters in Ultron, Vision, the Maximoffs, Dr. Helen Cho (Claudia Kim), and Ulysses Klaue (Andy Serkis). As exhausting as it all sounds, believe it or not, Whedon keeps all his balls in the air! But no one would blame you if you needed a cheat sheet to keep track of everyone.

As with the first Avengers, you could say Age of Ultron is just a smidge too long, but considering how much fun you’re having, it flies by faster than any film deserves. And not one of the characters gets short shifted. In fact, Age of Ultron actually winds up giving most of the floor to Hulk, Black Widow, and Hawkeye. An unexpectedly heart wrenching love story unfolds between Banner and Romanoff, and I would never spoil the surprise awaiting audiences involving one character’s home life. The cast are all at the top of their game, with Spader fitting right in as the maniacal A.I. from hell — Ultron never understands that his ambitions are evil and only wants what’s best for the world, even if it means its own annihilation. But Ultron stands with the best villains and gets some amazing one-liners, even if you may be too scared to repeat them in case he hears you.

But does any of this really matter? We came for the big show, right? And on spectacle alone, Whedon proves he continues to be one of the best action directors working today. Never scared to stop for an important smaller moment amidst the chaos, characterization is in full swing, no matter how much carnage ensues. With the amount of surefire blockbusters lined up this summer — with Furious 7 already becoming the fastest billion dollar grossing film ever — I can only imagine how much money Age of Ultron will wind up collecting. Considering how crowd-pleasing it is, at least it deserves every penny. Make no mistake, this is not an arthouse film wrapped up in a mega-budget, but Whedon knows we expect more than just CGI and explosions. The bottom line is this: summer is officially here, and Age of Ultron blasts expectations to infinity and beyond, setting the bar as high as you can imagine for everything else headed our way.

*Note: There is one, I repeat ONE mid-credits scene. Whedon made an official announcement that there is nothing after the credits, and he wasn’t lying. You’ve been warned!