'We Bought A Zoo' Sweepstakes 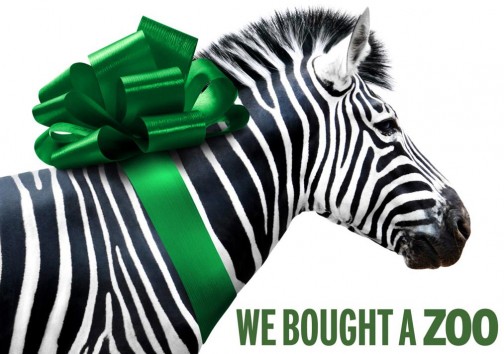 Two weeks ago, sneak previews were held across the nation for the new Cameron Crowe flick We Bought A Zoo. 20th Century Fox kicked off a contest at the same time were the winner received airfare, hotel accommodations and admittance into the world-famous San Diego Zoo for four. To enter the “20 Seconds of Courage” sweepstakes, you were asked to attend the special screening and upload a video to their site with your opinion of the film. Click here to go to the official site and see how easy it is. When you watch the uploaded videos, you’ll notice that not many people have entered to win. Considering this is a nationwide promotion, I’d say you’re chances are great.

The sneak previews were a huge success all over the nation, so tonight , December 10, they’re once again hosting them in select theaters across the nation. While select theaters usually means New York and Los Angeles only, it doesn’t this time. It’s happening all over the county. Check the sites of your local theaters for showtimes. Having already seen the film (but not yet allowed to review it), we invite and encourage you to grab the family and check out one of the very best movies you could see over this holiday season. There’s usually a lack of quality in “feel-good” movies, but We Bought A Zoo is the perfect balance – plus, it’s absolutely family friendly!

If you’ve already got plans for the evening, scrap ’em. It doesn’t matter what age you are or what phase of life you’re in, We Bought A Zoo is smart, well-made, beautiful, heartfelt, honest and one hundred percent entertaining. You won’t be let down. And who knows, you could win a four-pack trip to the greatest zoo in the world!

We Bought A Zoo