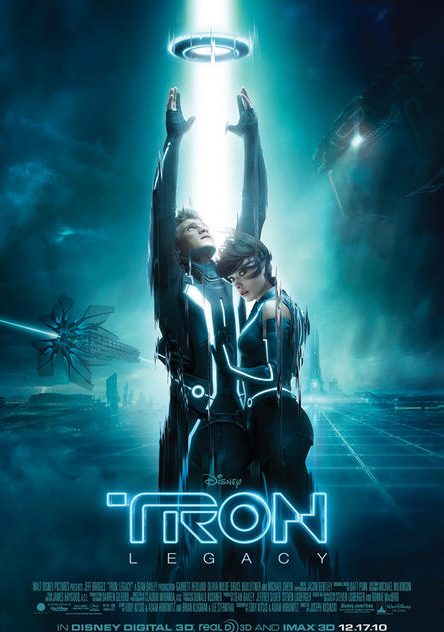 Did you miss Tron Night last week, Disney’s special look into December’s Tron Legacy? In case you missed it, below I have embedded a short clip from the twenty-something minutes that were shown in IMAX 3D and here is a quick rundown of what was shown:

– An old DOS-looking screen opened the event with a welcoming typing text that began with “Greetings programs…” and told us that we were about to see footage from the first half of Tron Legacy. Although it claimed that the pre-Tron world footage was not in 3D, it really was.

– Scene 20 – Sam’s Apartment
Alan became Sam’s father figure after his dad’s disappearance. In this scene, Alan tells Sam that he received a page (yes, we find out why Alan still carries a pager) from Flynn’s Arcade. After Alan leaves, Sam hops on his bike, heads to the arcade, move’s Encom’s Tron game and finds a secret basement office. Sam activates his father’s old computer and ends up setting off the laser. This scene ended just as the laser went off. Just like the world of Tron, hopefully they have updated this effect.

– Scene 32 – Disc Wars
Yes, we were shown Sam’s entire first disc battle. It was like Gladiator meets The Matrix. This one scene alone was far more impressive than anything in the first movie.

– Scene 52 – Escape Route
At the end of a light cycle battle, Sam is rescued by Quorra. Part of this clip can be seen below. The light cycle stuff is beautiful!

– Scene 56 – The Safe House
After breaking out of the grid, Quorra takes Sam to the safe house where his father has been hiding out. This emotional reunion scene was reminiscent of Batman Begins and The Dark Knight. While you are watching something fantastic and super stylized, it holds a strong emotional story at its heart.

– After scene 56 we are shown an awesome montage that is introduced by a clip with Michael Sheen and Daft Punk in Tron uniform, of course. Although most of this footage was stuff from the teaser and trailer, every once in a while they showed something that we have not seen before. Seeing these awesome new things made me excited to see the whole film because it showed me that they are saving some things to be seen in the movie, not all spoiled in the previews.

While I have been excited to see Tron Legacy all along, seeing this footage made me antsy to see it. I am not a die hard Tron geek, but this is making me into one. I can hardly wait!