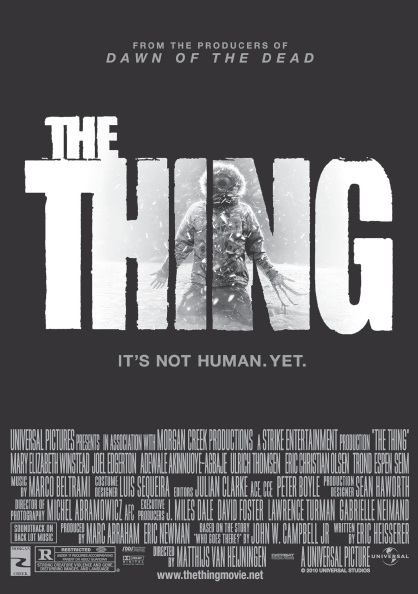 You and a guest are invited to an advance screening of THE THING on Tuesday, October 11 at 7:00pm in Salt Lake City. Please e-mail buzzboslc@gmail.com your name, age and mailing address to enter to win a screening pass for two. You must be 17 years or older and include “THE THING – The Reel Place” in the subject to qualify.

THE THING has been rated R for strong creature violence and gore, disturbing images and language.

Antarctica: an extraordinary continent of awesome beauty.  It is also home to an isolated outpost where a discovery full of scientific possibility becomes a mission of survival when a creature is unearthed by a crew of international scientists.  In the thriller The Thing, paranoia spreads among a group of researchers as they encounter something inhuman that has the ability to turn itself into an exact replica of any living being.

Paleontologist Kate Lloyd (Mary Elizabeth Winstead) has traveled to the desolate region for the expedition of her lifetime.  Joining a Norwegian scientific team that has stumbled across a ship buried in the ice, she discovers an organism that seems to have died in the crash eons ago.

But it is about to wake up.

When a simple experiment frees the thing from its frozen prison, Kate must join the crew’s pilot, Carter (Joel Edgerton), to keep it from killing them off one at a time.  And in this vast, intense land, a parasite that can mimic anything it touches will pit human against human as it tries to survive and flourish.

The Thing serves as a prelude to John Carpenter’s classic 1982 film of the same name.  Directed by Matthijs van Heijningen, the thriller is produced by Strike Entertainment’s Marc Abraham and Eric Newman (Dawn of the Dead).