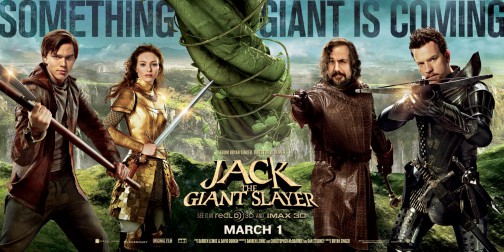 The Reel Place is excited to be giving away passes to an advance screening Bryan Singer’s new flick, JACK THE GIANT SLAYER, taking place on Monday, March 25 at 7PM in Salt Lake City.

Although ticketing will still be through Gofobo, the studio is trying something new that will even the odds for getting passes. This code will allow you to enter to win passes. Winners will be selected on Friday, February 22 and will then be able to download tickets. This way everyone can have a chance to get a ticket – not just the ones who see the post first. We’ll see how she works. To enter to win passes, please click here.

Opening on Friday, March 1, 2013 in 3D and 2D in select theaters and IMAX.
Rated PG-13 for intense scenes of fantasy action violence, some frightening images and brief language.
Synopsis: An age-old war is reignited when a young farmhand unwittingly opens a gateway between our world and a fearsome race of giants.

Unleashed on the Earth for the first time in centuries, the giants strive to reclaim the land they once lost, forcing the young man, Jack (Nicholas Hoult), into the battle of his life to stop them. Fighting for a kingdom and its people, and the love of a brave princess, he comes face to face with the unstoppable warriors he thought only existed in legend… and gets the chance to become a legend himself.