'How to Train Your Dragon Live Spectacular' Coming to Salt Lake City! 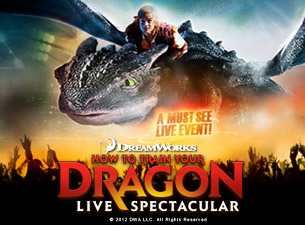 Ever since Kung Fu Panda, I’ve been surprised and delighted to see what DreamWorks Animation has in store for us next. The first two Shrek titles were great, but starting with Panda, as if a change occurred overnight, DreamWorks began pumping out animated tales with real substance, enduring titles that one would expect from a seasoned veteran studio, not one that was in its teenage years of being in animated entertainment. My personal favorite of them all is How to Train Your Dragon; it was the first flick that I took my (then) almost three-year old daughter to see on the big screen – but my love for the film doesn’t just stem from daddy-daughter nostalgia. I screened How to Train Your Dragon several weeks before I took her to see it and fell head over heels in love with it then.

When I reviewed the Puss in Boots Blu-ray for High-Def Digest, a trailer was included on the disc for the How to Train Your Dragon Live Spectacular – a live-action arena show featuring actors, enormous mechanically operated dragons and whole lot of pyrotechnics. My knee-jerk reaction was, “I’ve got to take my daughter to see this!” But then I remembered, “Oh, yeah. These sorts of showly never stop by our town.” Boy, was I wrong.

After receiving critical acclaim from shows in Australia, New Zealand and North America, the How to Train Your Dragon Live Spectacular is stopping during its global tour here in Salt Lake City, Utah. Tickets are now on sale to see this widely adored show at the Energy Solutions Arena on January 10-13, 2013. For ticketing information, please visit http://www.dreamworksdragonslive.com, Smith’s Tix or your local Smith’s grocer/Markerplace.

Watching the memorable characters – both big and small, human and dragon – make the leap from the screen to reality is a priceless memory that I want my daughter to have. The How to Train Your Dragon Live Spectacular is playing in more arena’s than Salt Lake City, so see the schedule dates and locations below. Should you decide to take the family out to SLC performances, we will definitely see you there.