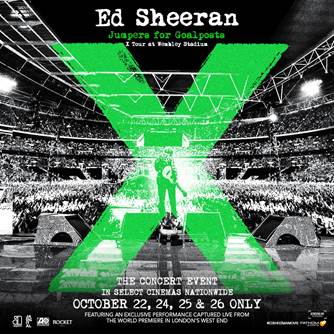 Go behind the scenes with the singer-songwriter when Fathom Events and ScreenLive bring his concert feature Ed Sheeran: Jumpers for Goalposts to cinemas nationwide. Captured live from Ed’s historic three-night performance at Wembley Stadium, this event features an exclusive look into the hectic preparations that went into the biggest shows of his career. (So far!)

Enter for your chance to win a pair of tickets to attend Ed Sheeran: Jumpers for Goalposts here. If you don’t win, don’t fret! Tickets are available to purchase now. See you there!