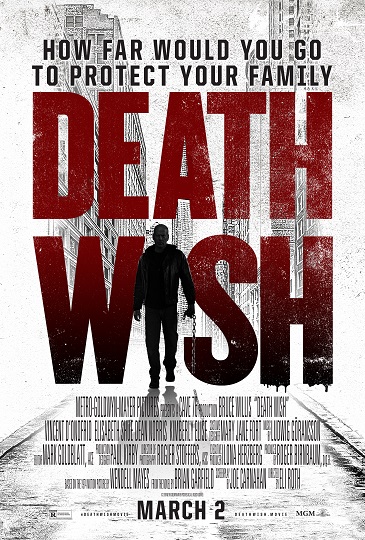 Bruce is back. You and a guest are invited to see his new film Death Wish for free before it opens! Click here for your chance to download an admit-two pass to the special advance screening being held on Wednesday, February 28 at 7PM in Salt Lake City! Seating in the theater is first-come, first-serve and is not guaranteed. Please arrive early for ticket exchange. We’ll see you there!

Synopsis: From director Eli Roth, Dr. Paul Kersey (Bruce Willis) is a surgeon who only sees the aftermath of his city’s violence as it’s rushed into his ER – until his wife (Elisabeth Shue) and college-age daughter (Camila Morrone) are viciously attacked in their suburban home. With the police overloaded with crimes, Paul, burning for revenge, hunts for his family’s assailants to deliver justice. As the anonymous slayings of criminals grabs the media’s attention, the city wonders if this deadly avenger is a guardian angel or a grim reaper. Fury and fate collide in the intense action-thriller Death Wish. MGM will release Death Wish nationwide on March 2, 2018.