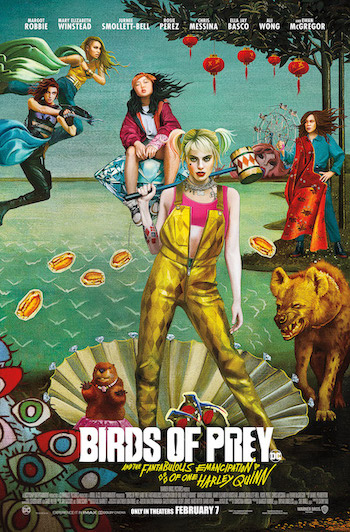 It’s time to see how the fantabulous Harley Quinn fares without her dear Joker. We couldn’t be more excited to offer you the chance to win advance screening passes to see Birds of Prey (And the Fantabulous Emancipation of One Harley Quinn) in IMAX on Wednesday, February 5 at 7pm in Sandy, Utah. Head over to www.wbtickets.com/ReelBOP to request passes. Starting January 30, winners will be notified with their unique download codes. (One entry per person, multiple entries will be disqualified. Passes do not guarantee admission as theater may be overbooked. Arrive early!) We hope to see you there!

Synopsis: You ever hear the one about the cop, the songbird, the psycho and the mafia princess? Birds of Prey (And the Fantabulous Emancipation of One Harley Quinn) is a twisted tale told by Harley herself, as only Harley can tell it. When Gotham’s most nefariously narcissistic villain, Roman Sionis, and his zealous right-hand, Zsasz, put a target on a young girl named Cass, the city is turned upside down looking for her. Harley, Huntress, Black Canary, and Renee Montoya’s paths collide, and the unlikely foursome have no choice but to team up to take Roman down. In the Warner Bros. Pictures film, Margot Robbie (I, Tonya) returns as Harley Quinn, alongside Mary Elizabeth Winstead (10 Cloverfield Lane, TV’s Fargo) as Huntress; Jurnee Smollett-Bell (HBO’s True Blood) as Black Canary; Rosie Perez (Fearless, Pitch Perfect 2) as Renee Montoya; Chris Messina (Argo, TV’s Sharp Objects) as Victor Zsasz; and Ewan McGregor (Stephen King’s Doctor Sleep, the Trainspotting films) as Roman Sionis. Newcomer Ella Jay Basco also stars as Cassandra “Cass” Cain in her feature film debut. #BirdsOfPrey in theaters February 7.