An Americanized version of Shaun of the Dead. Made for anyone and everyone who can handle awesome and comedic, gross and over-the-top zombie killings and zombies killing, as well as anyone who dreams of there one day really being a zombie outbreak. 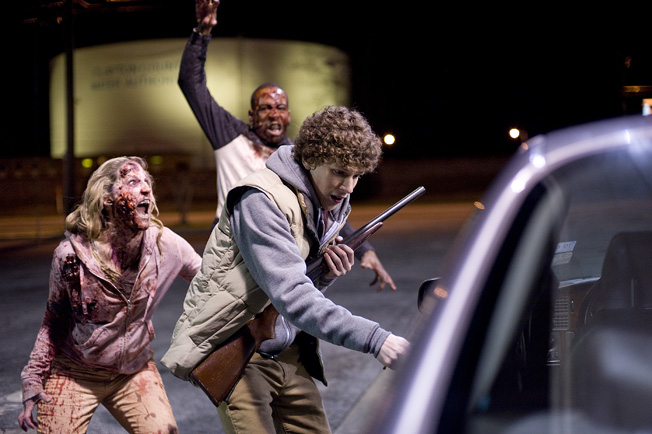 Humans are no longer the dominant beings in the U.S. – zombies are.
The few surviving humans now know it as the United States of
Zombieland. For survival and self-preservation, one must rely on a
series of strict guidelines and rules. It’s every “living” man for
himself.

The less you know about Zombieland going into it, the better you are. For that reason I’ll be brief and vague. Jesse Eisenberg (Adventureland)
plays Columbus (each character is named by the location he or she is
from), an online gamer who rarely left his dorm before the zombie
outbreak. Now hoofing it down the dangerous road home to see if his
family is still alive, Columbus runs into Tallahassee (Woody Harrelson,
No Country For Old Men) – a
snake-skin-jacket-wearing multi-weapon-wielding zombie killing machine
searching for one of life’s long lost “little things.” Heading in the
same direction, Tallahassee offers Columbus a ride. Both hit a road
block when when their plans are turned upside down by two conniving
sisters, Wichita (Emma Stone, Superbad) and Little Rock (Abigail Breslin, Little Miss Sunshine),
heading to Pacific Playland – a supposed zombie-free amusement park in
Los Angeles where Wichita can help Little Rock remember what it’s like
to be a kid.

Because of so many awesome surprises and ideas used in Zombieland,
I recommend you stop watching trailers, television and online spots.
Don’t read any reviews (other than this one). For some reason, all
marketing ploys right now are spoiling some of the best and most
memorable parts. Don’t let anyone tell you a thing about it, because
those are the things people will be talking about after seeing it.
Avoid spoilers like zombies!

Nut-up or shut-up. Go see Zombieland immediately. It’s bloody, disgusting, creative and hilarious! I promise you that you wont be disappointed in the slightest. 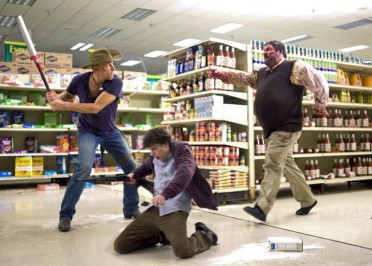