An entertaining, funny and completely forgettable "good for the moment" comedy. Made for rebellious teens, fans of Michael Cera (past, present or future), coming-of-age and losing-virginity comedies.

Rated R for sexual content, language and drug use. 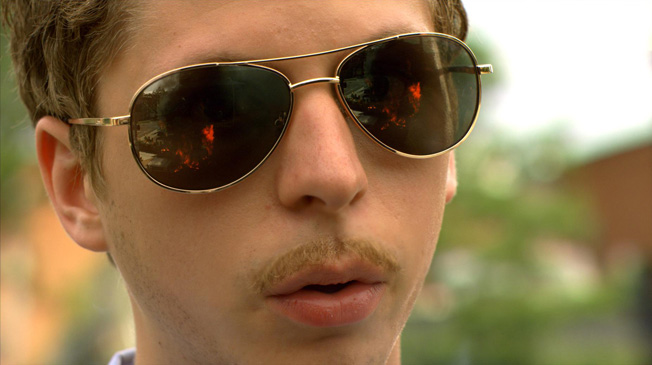 Nick Twisp (Michael Cera, Superbad) is a wanker surrounded by a world of wankers. His idiot father (Steve Buscemi, Fargo)
is remarried to a twenty-something bimbo trophy wife. His mother has a
trashy truck-driving live-in boyfriend (Zach Galifianakis, The Hangover)
that’s addicted to painkillers. When he, his mother and her boyfriend
vacation to a rented trailer in a wooded trailer park, Nick not only
meets Sheeni, the love of his life that he’d like to lose his virginity
to, but also a hundred more wankers. Her parents, brothers and
neighbors are all wankers too.

Getting
in the way of Nick being able to lose his virginity to Sheeni are all
of these wankers and the fact that she wants a wanker boyfriend. So
Nick does the drastic. He creates an alter-ego – much like Tyler Durden
in Fight Club – to her
liking. Nick’s alter ego, Francois Dillinger, is a powerful, vulgar,
French tool that is willing to do whatever it takes to get whatever he
wants. In an attempt to get the girl, Nick and Francois end up in a lot
of trouble with both of his parents, Sheeni’s parents, her friends, her
school and the Berkley Police Department.

While Youth In Revolt
is actually very funny, I can’t see it standing the test of time. It’ll
definitely draw a lot of laughs, but end up forgotten in the long run.
If you enjoy and can handle mass amounts of adult humor along the vein
of American Pie and Sex Drive, then you’ll definitely find Youth In Revolt worth watching. If not, you’ve been warned.