Back to basics for its director and a bit uneven, but there's plenty of fun to be had. Made for Shyamalan fans who'd lost hope in the director and those who know what Blumhouse Productions is.

Rated PG-13 for disturbing thematic material including terror, violence and some nudity, and for brief language. 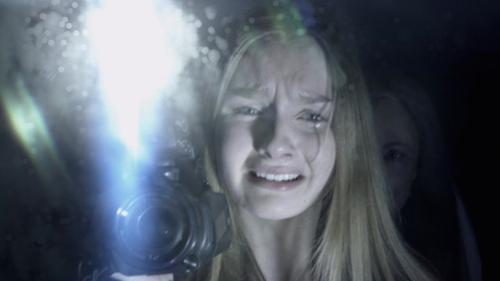 Some directors may be hit or miss, but when it comes to M. Night Shyamalan, let’s just say the man’s career hit a brick wall. After the trifecta success of The Sixth Sense, Unbreakable, and Signs, he tried one twist too many and gave us the whopper of a dud-ending with The Village and he’s never been able to recoup. Hobbling along through the likes of the unintentionally hilarious Lady in the Water and The Happening, he managed to one-up himself with one of the worst films ever made: The Last Airbender. And the less said about After Earth the better.

So, after a two-year stretch, and what feels like a trip back to the drawing board, Shyamalan returns with The Visit. Another horror-thriller, this time he wants us to laugh with him, not at him. While it does include one of his “time honored” twists, at least this one makes sense. Even if it doesn’t have quite the impact he’s hoping for. What should have been a moment akin to the Black Christmas realization that projects the film into an unforgettable fourth quarter hail mary of twisted hilarity.

Becca (Olivia DeJonge) and Tyler (Ed Oxenbould) have never met their grandparents Nana (Deanna Dunagan) and Pop Pop (Peter McRobbie). Their Mom (Kathryn Hahn) left their house 15 years ago after they condoned her relationship with an older man that resulted in Becca’s arrival. Now, she’s decided it’s time they meet their grandparents and they’re off to stay the week alone, armed with video cameras so Becca can make a documentary. Things seem okay at first, the only real house rule being to not leave their room after 9:30. Something they soon learn they should take seriously after they witness Nana having a bout of vomiting and clawing the walls naked.

Pop Pop quickly explains it away as Nana having a case of “sundowning” and can’t control herself once the sun goes down. But Pop Pop doesn’t seem to be all there either. He’s keeping something hidden out in the shed and dresses up for a costume party with nowhere to go. It goes from bad to worse on a daily basis, with their friends stopping by to say hello just as they’ve conveniently stepped out for a walk. Now, Becca and Tyler must find out what’s up with their grandparents before their safety finally starts to be something they should really worry about.

Shyamalan has stated that he made three cuts of The Visit: one horror, one comedy, and the final release a mix of the two. I can’t really seeing either of the straight on horror or comedy working anywhere near as well as it does mixed together. The mystery isn’t strong enough to keep the suspense, while the comedic elements aren’t really funny enough to support the other. Together, there’s just enough of each to keep us off balance while we wait for the payoff. Even if this one happens to be seen coming from a mile away. I told my wife a one-line synopsis and she was able to figure out the twist just from that, but I’m not going to spoil it here.

The cast is having more fun than usual for a low budget horror flick. DeJonge plays years older than her young 17-years-old would lead you to believe, and Oxenbould is nowhere near the nuisance he was in Alexander and the Terrible, Horrible, No Good, Very Bad Day. Although, they could have cut all of his rapping scenes and Tyler would have been even more bearable. Dunagan and McRobbie are the real stars here, holding nothing back as Shyamalan keeps upping the ante, making their characters more deranged with each scene. And for once, the use of found footage made sense, even if Shyamalan should not be the one giving filmmaking tips via Becca. It comes off as extremely pretentious and gets old fast.

However, there are plenty of surprises, laughs, and gross-outs to feast on here. Shyamalan may not be back at the top of his game, but this is definitely the best film he’s made in 13 years. For some that may come as faint praise, but considering how awful his last five films were, it’s actually quite the accomplishment. The Visit is safe for horror fans to pay their own visit to the theaters. You just might want to make sure there aren’t any old folks in the audience if you’re attending a late night screening. Sundowning is a real thing and it’s creepy as hell, just like most of the movie.