The rare sequel that bests the original, but still knows it has to rely on it to reach the heights it aims for. Made for fans of the original, fans of Cruise, fans of action, fans of movies.

Rated PG-13 for sequences of intense action, and some strong language. 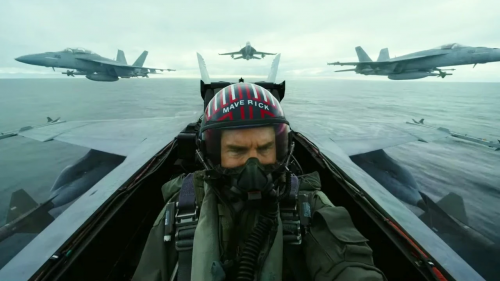 Considering the star power of Tom Cruise, ’80s sequelitis, and box office success, you’d think there’d be at least 10 Top Gun movies by now. Thankfully, no one attempted to make a sequel until the right story came along, and after 36 years — technically 34 due to obvious delays from its planned 2020 release — it’s finally time to kick the tires and light the fires. Yes, the highway to the danger zone has returned. Director Joseph Kosinski reteams with Cruise to give us the sequel we’ve all been waiting for. And it’s no slight to Tony Scott, but Top Gun: Maverick is the rare sequel that betters the original. That being said, at least it knows it has to rely on the original in order to be as fantastic as it is.

Capt. Pete ‘Maverick’ Mitchell (Cruise) has not lost that loving feeling. He’s still involved with the program, albeit as a successful instructor. Knowing how quickly his ego could still get him grounded, he’s relied solely on Adm. Tom ‘Iceman’ Kazansky (Val Kilmer) to have his back and keep him out of trouble. But just wouldn’t you know it, destiny comes calling as he’s ordered to report back to station in North Island, to take the lead and get a ragtag group of Lts. up to speed to take out a uranium plant. Adding salt in the wound, Lt. Bradley ‘Rooster’ Bradshaw (Miles Teller) — ‘Goose’s’ now-grown son — is in the mix, still reeling from Maverick pulling his papers and setting him behind. Now, everyone must find a way to work together, with the stakes higher than ever.

Okay, we all know the original Top Gun was a glorified recruitment video that just happened to become an instant classic worldwide. But now, Kosinski and Cruise — along with writers Ehren Kruger, Eric Warren Singer, and Christopher McQuarrie — are out to show us what lies behind the training. A lot of pilots, and wingmen, don’t come home, and the reality resonates throughout the film. Cruise brings Maverick into the present as a version of the character from the first film, along with all the tropes of being a Cruise character. He loves to play versions of himself, and honestly, is there any other character that probably comes as close to being the real Cruise?

The supporting cast all work amazingly together — Teller is the standout, but that’s no surprise considering the character’s history — but Kosinski knows we didn’t come here for the newbies. At least not to watch them sit around prodding and bickering with each other’s egos. We came for the stunts and man oh man, the action sequences are exactly what IMAX is made for. Sure, you can still watch it in a standard theater, but the real action is IMAX-sized through and through. Now, there is still plenty of character building and arcs — mostly through the use of Maverick rekindling an old flame with Penny Benjamin (Jennifer Connelly). But the real heart of the film is Kilmer’s ‘Iceman.’ It’s amazing to see Kilmer back on the big screen in what could ultimately be his final film role, and he makes the most of every second.

If there’s anywhere the film nearly falters, it’s in the finale, where it starts to feel like things are drifting into Mission: Impossible territory. Granted, those films try to keep the bombastic at least slightly grounded where possible, but it just wouldn’t fit in a Top Gun kind of adventure. And before you can hear the theme music start, it gets right back on track and into the air. The wait for Maverick was totally worth it and hopefully it doesn’t kick the franchise into overdrive and fly it into the ground. When it took 36 years to get a follow-up this good, let’s have Maverick go out on a high note and not ground the IP with cash cow sequels or spin offs. Top Gun: Maverick is the summer blockbuster we deserve.