A confusing attempt between homage and reboot with not enough werewolf violence. Made for i'm not sure...Maybe my friend Magnus. 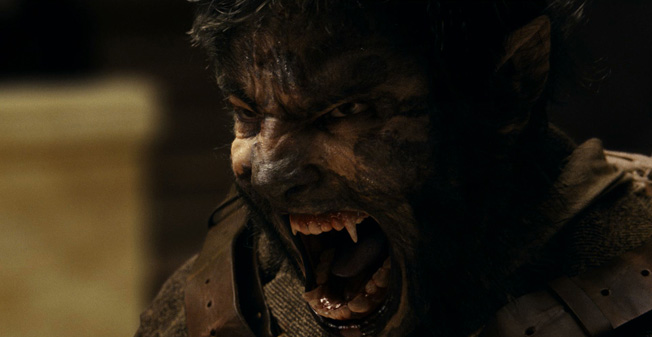 “Wolfman” is a remake of the 1941 film of the same title. Directed by Joe Johnson and starring Benicio Del Toro, (The Hunted and Snatch) Anthony Hopkins, (Meet Joe Black and The World’s Fastest Indian) Hugo Weaving, (V For Vendetta and The Matrix Trilogy) and Emily Blunt. (The Devil Wears Prada and Charlie Wilson’s War) The film centers around Lawrence Talbot (Del Toro) who is a famous actor called to the home he left behind after hearing the news of his brother’s death. His father played by Hopkins, a hermit locked in his huge creepy mansion with his was to be daughter in law Gwen Conliff. (Blunt) Lawrence shaken by his brother’s untimely death decides to stay until he can find out what happened to his brother. But at the same time other murders are taking place in the woods under the full moon. With the townspeople devided as to what could be causing these deaths they start to turn to lore and believe in a beast.

I feel like the werewolf genre has been dumped on over the last few years. I don’t need to tell you how gay the puppies in Twilight are or how almost cool the werewolf’s are in Underworld. There really hasn’t been an awesome werewolf movie since “An American Werewolf in London.” This genre has been trying for years to reboot with nothing more than false starts. Enter Joe Johnson. After the first director walked out on “Wolfman” Universal calls the last guy on everyone’s list Joe Johnson the master storyteller who has given us hits like Hidalgo and Jurassic Park 3. Oh a side note: I needed to see this movie to see how the Johnson was going to ruin my favorite superhero, Captain America. I am going to petition Marvel to put a stop to this huge mistake. Sorry about the nerd rant, back to the review. Joe Johnson is known for huge special effects and empty stories. We have great CG transforming man to werewolf, really cool make-up, but a super boring story. The movie starts and you kinda feel like you missed the first chapter because they don’t really establish any characters story right away. Plus the film keeps switching between a throwback to the original and a updated werewolf tale. They keep a throwback element by using pretty good looking retro makeup. However they take forever getting to the werewolf scenes, which is the reason we went to the movie in the first place and then have very little werewolf scenes. What a tease.

Benicio Del Toro looks like he could care less that he is in this movie and keeps thinking how sad it is that most people will miss him in “Che” but see “The Wolfman.” Anthony Hopkins plays the same old Hannibal spinoff character he has played forever. All of the other actors give their standard character performances and nobody really tries. So America, see it or skip it? Either way you’ll break even, Steven.