A gritty drama about robbing banks that turns out nothing more than generic cliches. At least it's well acted. Made for fans of heist films that still don't mind all the cliches that come with them. 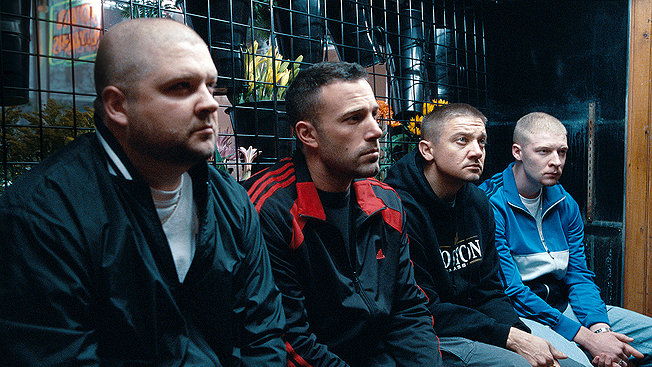 The heist film has been around ever since storytelling met celluloid. It’s an age old tale. The trick is can you expound on the heist film to make it more than just, well, a heist film? The Town would like you to think that it does.

We’re notified at the beginning that Charlestown, in Boston, has produced more bank and armored car robbers than any other city in the nation. Bank robbing is a family business and they’ve gotten pretty good at pulling off some elaborate heists. Doug MacRay (Ben Affleck, who also directed) is the ring leader. He’s the quintessential heist film protagonist. An anti-hero of sorts, MacRay finds himself robbing people blind, but deep down is a good guy.

Like every other movie dealing with stealing large amounts of money with teams of people, Doug wants this to be his last job. He wants to leave the business of bank robbing. “This is my last job!” Yeah, we’ve never heard that ever before. Doug’s team is made up of a couple dispensable street thugs that we care little about, and his close friend James Coughlin (Jeremy Renner The Hurt Locker). James is the requisite hot head of the group, who more often than not finds himself responsible for the heat the team is getting from the feds.

Leading the FBI task force put together to track these guys down is Special Agent Adam Frawley (Jon Hamm Mad Men). Frawley will stop at nothing to bring these guys in.

During a robbery gone slightly wrong at the beginning Doug and his crew are forced to take a hostage in case the cops catch up with them during their getaway. Claire Keesey (Rebecca Hall The Prestige) is the bank’s manager. They blindfold her and make sure she never sees their faces. They take her driver’s license so they know where she lives. Doug follows her, and bumps into her at a laundry mat where he strikes up a conversation. They go out, a relationship forms, all the while Doug is trying to find out what she knows and what she’s told the cops. Although he didn’t count on falling in love with her. No one ever counts on that happening.

Doug’s character is completely flawed. Don’t get me wrong Affleck is great here, and his writing and directing are top-notch. Instead Affleck tries to make Doug a tortured character, but it’s hard to buy. When Claire inevitably finds out who Doug really is, he convinces her to ask him any question she wants and he’ll answer truthfully. She asks him if he’s ever killed anyone, then Doug answers with a resounding “No!” This is hard to believe since much of the movie shows Doug and his crew unloading automatic gunfire on numerous crowds of policemen hunched behind their cruisers with innocent bystanders always nearby.

We’re supposed to feel for Doug. Like he grew up in the wrong neighborhood and bank robbing was just in his blood. The movie wants us to root for this bank robber with a heart of gold or otherwise the movie falls flat and lifeless. Maybe I’ve just grown tired of the sympathetic bank robber character, or maybe Doug is just a moron and expects us all to buy the crap he’s shoveling.

The Town has some brilliant action scenes that are extremely intense. It has great, even at times, hilarious writing. But, when it comes to characterization it’s completely by the book as far as heist films go. There’s no surprise here, and you can see the clichéd ending coming a mile away. It’s hard to root for a guy who’s not only so contradictory, but also so generic.