A generic heist movie with a generic plot and overtly mean generic characters. Made for people who need to go to the movies this weekend and have seen literally everything else there is to see -- and even then I'm not sure they'll like it much.

for violence, pervasive language and drug use. 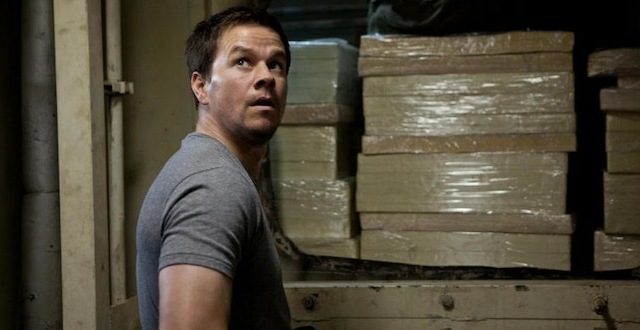 Heist movies usually all follow the same exact formula. The main character has just decided to get out of the thieving way of life, but there’s something that draws them right back in for “one last score.” It never fails really. This is the formula they use because it’s a somewhat effective one. It’s not easy to root for people who are criminals for a living, but how about an ex-criminal who is stealing because he has no choice?

Contraband is as generic as heist movies come.

Chris Farraday (Mark Wahlberg) used to be a world-class smuggler. If you wanted something snuck across international borders he was your guy. He’s since gotten out of the life though – sound familiar? He now runs a respectable business installing home alarm systems. However, there are people in Chris’ family that haven’t given up the life yet.

Andy (Caleb Landry Jones), Chris’ brother-in-law has just pulled a smuggling job that went wrong. In order to not get caught with a bag full of drugs Andy had to dump it over the side of the ship before U.S. Customs found it. Andy is now in debt to one of the city’s most ruthless criminals and Chris must pull one last job to save him.

Here’s where you think the movie is going to get really good. If it doesn’t want to break from the stereotypical storyline of a heist movie at least it is going to set itself apart with its acting right? Contraband boasts two of Hollywood’s strongest character actors: Giovanni Ribisi plays Tim Briggs, the criminal who Andy is no indebted to; and Ben Foster plays Sebastian Abney, Chris’ best friend.

Ribisi and Foster is a potent acting combination. Ribisi disappears in the dirty, high-talking Tim Briggs. He really throws all he’s got into the role and it turns out to be the highlight of the movie. Foster is more or less wasted in his role as Sebastian. He has his moments, but he’s asked to play the role completely straight-laced, which doesn’t really play to his strengths as an actor.

Sadly, Contraband just can’t overcome its general laziness in storytelling. Bad guys operate with impunity without the least bit worry of repercussion because in movie-land cops only show up when it’s pertinent to the plot. Chris’ master plan for his one last score is never fully realized. There isn’t some sort of “Ocean’s Eleven” scene at the end where we get to gawk at how he actually pulled off such an elaborate heist. Instead we’re left thinking: Yeah, there’s no way he actually did that. It would’ve been impossible given the time and circumstances he had to work with.

January is notorious for starting the year off with clichéd, half-interesting movies. Contraband completely fits that definition. It’s not so bad that you’ll find yourself groaning at the movie screen, but it never engages the viewer on any other level of intelligence. It expects you to sit there and believe everything that’s happening without asking questions of your own. You’re just supposed to believe it went down the way it did because the movie had to end at some point.