A film that works really well – but not according to fans of the book. Made for fans of intense murder mysteries and fantasy done in the Peter Jackson style. 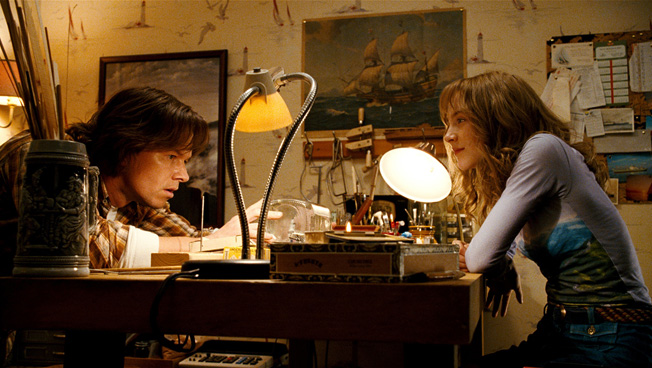 There are few things more disturbing than the abduction, rape and killing of children. Because the premise of The Lovely Bones revolves around these issues, mostly focusing on the creepy individual committing these atrocities, a lot of people are turned off by the idea of it. My own wife has expressed how much she does not want to see it basely solely on the subject matter, despite her affinity for director Peter Jackson. But there’s one thing that everyone should know about The Lovely Bones before deciding whether or not to see it: although the film’s story revolves around these disturbing elements, it is carried out and executed in the most tasteful and delicate manner. Had it not, it would not have received a PG-13 rating. For those who wont see it because of the plot, I guarantee you it’s not as hard to watch as you may think.

Just as the trailers have shown, teenager Susie Salmon (Saoirse Ronan, Atonement) is the narrator to her own story. After being murdered (which is never even shown in the film) by a disturbed neighbor, Susie begins a fantastic journey through the afterlife in the beautiful “in-between” prior to going to heaven. This “in-between” is a place for restless souls who have unresolved business on earth – in Susie’s case, her killer’s identity is still unknown and he’s still on the prowl.

The complaint that I’ve heard the most from fans of the book upon which the film is based is that it doesn’t do the book justice. Instead of focusing on Susie and the “in-between,” it tells the story of her loving father (Mark Wahlberg, The Departed) obsessing over catching her killer, as well as that of the paranoid psychotic (Stanley Tucci, Julie & Julia) trying to keep his secret in the dark. Not having read the book, I can’t guarantee that these things are completely distracting to those already familiar with the story – it’s just what I’ve heard.

But not knowing the book, I can tell you that The Lovely Bones is an extremely well-crafted and well-acted film. Peter Jackson perfectly tells in a PG-13 manner what should be an R-rated story. The 1970s world that he creates feels purely natural and never forced. His “in-between” is beautifully bittersweet. Ronan’s performance of Susie captures the excitement, innocence and rebellious nature of teenage life, then turns it on its head as she matures to an adult in her afterlife. Playing the mentally sick killer, Tucci gives the best performance of his career. He is so creepy that every time he’s on screen, you want him to get off immediately. I can’t remember the last time I saw a character that moved me in that same way. And as parents torn apart by the unknown whereabouts of their daughter, Mark Wahlberg and Rachel Weisz (The Mummy) bring to life the polar opposite reaction that two parents might go through: he is obsessed with finding the killer before he can move along and stop grieving; she can’t block it. Everything reminds her of her loss. There is no escaping the harsh reality that one of her children is gone. As a parent, the film will make you will connect with one of them, learn how you might react in this same heart-wrenching experience.

Although most critics are divided in their opinions of The Lovely Bones, I’m standing by mine that it’s one of the best film of 2009 (as it was released in LA and NY in December to be eligible for the upcoming Oscars). Not only is it a brilliantly made production, but it’s powerful and moving.