One of the most brazenly hilarious films in years. Brace yourselves... and your sides. Made for batman fans, DC Comics fans, or anyone who wants to see what will probably wind up being the best animated film of the year.

Rated PG for rude humor and some action. 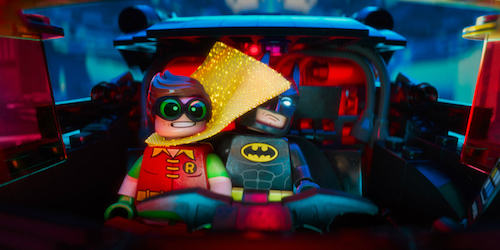 As reliable as family entertainment has become over the years, The Lego Movie blew everyone away. It was mind boggling to think that directors Phil Lord and Christopher Miller — the team behind Cloudy with a Chance of Meatballs and the Jump Street films — were able to take such a mundane property and show moviegoers the true master builders. When The LEGO Batman Movie was announced — under the new direction of Robot Chicken’s Chris McKay — it’s safe to say that possibly only Warner Bros. were sure this would work. Well, low and behold, here we are with a second LEGO film and it’s even better!

With Gotham City sitting in the lap of luxury knowing Batman (voiced by Will Arnett) will save the day, Joker (voiced by Zach Galifianakis) wants to make Batman realize that they need each other. Unfortunately for Joker, Batman doesn’t think he needs anyone — even with Alfred (voiced by Ralph Fiennes) sitting at home keeping Wayne Manor and the Batcave neat and tidy. After escaping Batman’s heroic clutches, Joker decides to unleash a coup de grâce just as Jim Gordon (voiced by Hector Elizondo) hands over the reigns to his daughter, Barbara (Rosario Dawson).

Turns out, Gotham City is built upon a bunch of flimsy plates and Joker wants to send Gotham into the abyss. But not before Joker winds up turning himself in and is sent to Arkham Asylum, which could be exactly what he wanted. Meanwhile, Batman is trying to juggle being the superhero, and taking care of newly adopted Dick Grayson (voiced by Michael Cera).

For an animated film, The LEGO Batman Movie is filled with jokes. And the best part is that every single one works. And thankfully, so does the movie. The best part, is that McKay — along with his five credited writers: Seth Grahame-Smith, Chris McKenna, Erik Sommers, Jared Stern, and John Whittington — keeps the shenanigans under control and it winds up functioning as not just one of the best animated films in years, but as one of the best Batman films ever. There is no hope for anyone who walks out of The LEGO Batman Movie unhappy. Plain and simple. It turns everything you know about Batman, DC Comics, and super villains, on its ear.

Last year, Deadpool ushered in a new kind of superhero movie that audiences and critics instantly fell in love with and The LEGO Batman Movie is poised to do the same. This is a whole new breed of comicbook movie and demands to be seen multiple times. It wasn’t screened for press in 3D, but I can only imagine it looks breathtaking considering how good The Lego Movie looked three years ago. The rest of 2017’s animated features are going to be hardpressed to beat The LEGO Batman Movie. And the same could be said for most of the live action films as well. This is superb entertainment from start to finish and will go down as one of the year’s best films.