An unrelentingly suspenseful reboot for Universal's Dark Pictures stable. Made for horror/thriller fanatics looking for something brainier, and less CGI-fueled, in their monster movies.

Rated R for some strong bloody violence, and language. 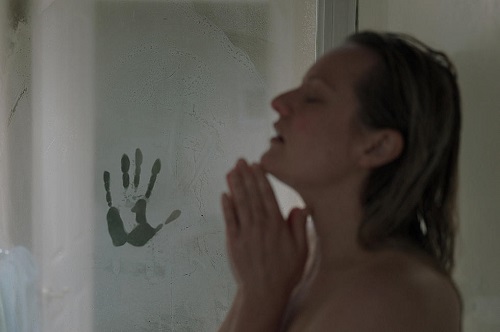 When Universal’s Dark Universe — a monster mash of interconnected films revolving around their revamped classic monsters — arrived it was DOA. Tom Cruise replacing Brendan Fraser in yet another CGI-filled take on The Mummy just didn’t resonate and failed miserably at the box office. Audiences should breathe easier with writer/director Leigh Whannell’s take on H.G. Wells’s The Invisible Man. With a meager budget of just $7 million, it takes a simpler approach involving a great story, incredible effects, an amazing performance from Elisabeth Moss, and unrelenting suspense from start to finish.

Cecilia (Moss) has finally escaped from her tormented relationship with Adrian (Oliver Jackson-Cohen). With the help of her sister, Emily (Harriet Dyer), she’s now living in seclusion with her friend James (Aldis Hodge) and his daughter Sydney (Storm Reid). Suffering from PTSD, she’s barely able to leave the house to grab the mail, terrified that Adrian is ready to pounce. Until Emily shows up to let her know that Adrian is dead and has left her $5 million. Soon enough, Cecilia begins to suspect that Adrian faked his own death, has found a way to become invisible, and is trying to make her look crazy. One of the stipulations behind her inheritance is that she can’t do anything illegal or be institutionalized. Let the games begin!

From the opening credits, The Invisible Man is drenched with terror. Whannell has been involved in some of the best horror films of the last 17 years — the first three Saw films and all four Insidious just to name a few — and hugely impressed with his last film, Upgrade. While I still need to educate myself with the apparent brilliance of that one, he’s delivered a phenomenal thrill ride here. Huge kudos to Universal for apparently ditching their planned shared universe idea to start focusing on individual films. It gives director’s a chance to do what they should be doing: storytelling.

There may be hints at Cecilia’s possible craziness, but thankfully, the film never relies on flashbacks to show her battered life with Adrian. Moss conveys Cecelia’s shattered emotions in every scene. Whannell is helped with some amazing cinematography tricks by Stefan Duscio and a killer score from Benjamin Wallfisch. This may be Wallfisch’s best yet. Full of long takes and freak-out gotcha moments, The Invisible Man is long on scares that never let up. Skip the trailer and hold on tight, it may only be February, but this is easily the horror/thriller funhouse to beat this year.