Tense but too long. In need of more editing which is surprising considering there are three credited. Made for true crime aficionados and Cranston fans who want to watch him strut his stuff.

Rated R for strong violence, language throughout, some sexual content and drug material. 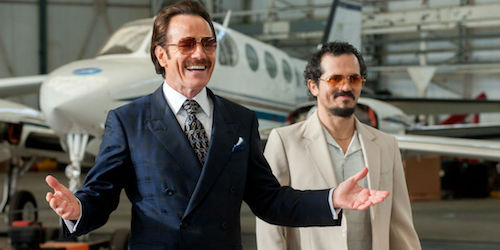 At this point, who hasn’t seen a movie about a cop/CIA/FBI agent getting in too deep while undercover? When it’s based around fact, it can get a little scarier — no disrespect to films like The Departed. And if there’s going to be any subject prone to thrills, it’s one man’s journey to take down infamous drug lord Pablo Escobar. Robert Mazur’s novel The Infiltrator has been adapted by Ellen Brown Furman into an intense screenplay, directed with mostly precision from Lincoln Lawyer’s own Brad Furman. With a commanding performance from Bryan Cranston, the menace feels all too real, even if a few editing touch ups could have made this one of the year’s most thrilling films.

In Tampa 1985, U.S. Customs special agent Mazur (Cranston) is undercover at a bowling alley when a faulty wire nearly gets him caught. Thanks to some leads brought to his attention from his co-worker Emir Abreu’s (John Leguizamo) informant, the two dive in to take Escobar down. But not without a few hiccups along the way of course. Dealing with the Bank of Credit and Commerce International (BCCI) is one thing, but a trip to a strip club causes a slip of tongue and Mazur — posing under the alias of “Bob Musella” — winds up with a fiancée, Kathy Ertz (Diane Kruger), and has to deal with threats both at home and in the line of fire. Mostly with his new friend, Roberto Alcaino (Benjamin Bratt), one of Escobar’s cartel board members.

Tension runs high through most of the runtime, but even at 127 minutes, it starts to feel long winded. It’s a surprise considering there are three credited editors: Luis Carballar, Jeff McEvoy, and David Rosenbloom. At least 20 minutes could have easily been excised. A cool technique comes from Joshua Reis’s cinematography and Furman’s decision to color-correct the whole film to make it look like it was shot on 16mm film stock.

The cast all perform marvelously, something that shouldn’t come as too much of a surprise. Cranston has always gone back and forth from the big to small screen effortlessly, and Leguizamo always looks like he’s having fun. Kruger may feel underused, but it’s nothing compared to Amy Ryan’s portrayal of Bonni Tischler. She had more to do in Central Intelligence than she does here, although she does get some much needed laughs. Oscar winner Olympia Dukakis even slips in for a few scenes, undoubtedly just so they can make a joke about Aunt Vicky giving an “Oscar caliber” performance when she comes face-to-face with Alcaino — a situation that seems way out of place and is never explained.

In the end, there have been better and worse biopics over the last few years, but The Infiltrator was clearly made more for the acting than the story. It only feels like a shame in the end, because everything points at this being one of the year’s best, instead it’s simply middling.