The Chronicles of Narnia: The Voyage of the Dawn Treader

Rated PG for some frightening images and sequences of fantasy action. 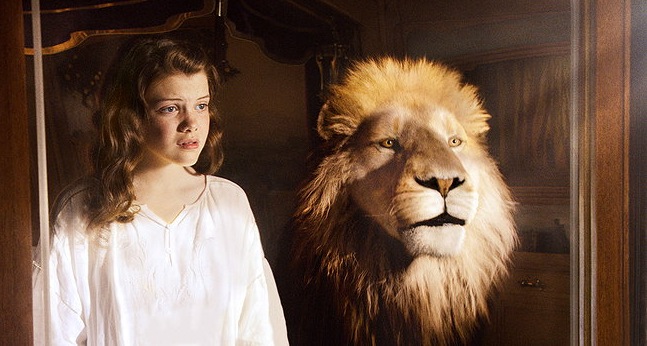 Everything that makes C.S. Lewis’ The Chronicles of Narnia a beloved series has been stripped away to turn them into politically correct Hollywood family films – the strong morals, the deep religious symbolism, even the plot. Now under distribution of a new studio (Walt Disney dropped the series after Prince Caspian), 20th Century Fox has done nothing more for the franchise than to up the quality of the production – Narnia has never looked so good. It’s too bad that is the only area in which The Dawn Treader exceeds it predecessors.

Because the two oldest Pevensie siblings no longer meet the age restriction to enter the magical land, the two youngest, Lucy and Edmund unexpectedly find themselves thrown into Narnia with their annoying younger cousin, Eustace. After this good-looking effects sequence, the three out-of-place kids turn up in the seas of Narnia in the path of Caspian’s boat, the Dawn Treader.

Once aboard and with Eustace passed out in shell shocked slumber, Lucy and Edmund learn why they were brought back to Narnia for a third time – seven lords bearing seven magical swords have gone missing. Each of them governed an island within Narnia’s borders. In their place a darkness has grown, capturing the innocent who inhabit the lord-less islands. Together Lucy, Edmund, Caspian and newcomer Eustace must find the seven swords and lay them on Aslan’s Table to defeat the threatening LOST-like smoke monster.
The Dawn Treader‘s highly-altered story removes any reason the children returning to Narnia. When they arrive, Caspian and his men (including Buffalo Man and Giant Talking Swordsrat) are already on this journey. They know what they need to do and they have begun their quest. Not a single one of the kids does anything that Caspian and his men weren’t already planning doing.

The biggest storytelling problem in The Dawn Treader is its lack of fun. Even though Eustace enters the story playing a highly annoying character, he transitions into the only character that adds the fun element to the movie. Everyone and everything else is simply taken far too serious.

C.S. Lewis’ Narnia series is widely known for its bold symbolism of Christian beliefs. While each film has quietly hinted to it, those points are not nearly as strong as they should be considering the work from which they are based upon. All religious symbolism is removed from The Dawn Treader with the exception of a blatantly obvious reference to Jesus Christ in the last minutes of the movie. It is baffling why the religion would be removed from the entire film, yet quickly crammed in your face just before the credits roll.

Just like most of the family movies out this holiday season, The Dawn Treader also fits into that mediocre area. While it may be entertaining for the 115 minutes you are watching it, The Dawn Treader lacks memorability. Hopefully Yogi Bear and/or Gulliver’s Travels will offer a more satisfying form of family entertainment.