The Call of the Wild

Filled with the most distracting CGI since the 'Garfield' and 'Chipmunks' heyday, only the most forgiving viewers will be able to stand the eye-rolling shenanigans that await more discerning audiences. Made for youngest family members only. 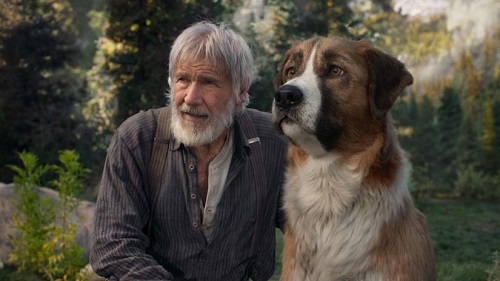 Writer/director Chris Sanders has been cutting his teeth in animation for a long time now. One thing they all have in common is action and scope — Mulan, Lilo & Stitch, the first How to Train Your Dragon, and The Croods — something that should be useful in a live action adaptation of Jack London’s The Call of the Wild. Ironically, what we wind up with is largely a live action cartoon of boneheaded proportions.

The story here is surprisingly simple. A giant dog named Buck (credited to motion capture specialist Terry Notary) is stolen from Judge Miller (Bradley Whitfod). Buck manages to escape some evil clutches, only to wind up as part of Perrault (Omar Sy) and Francoise’s (Cara Gee) Canadian dispatch dog sled team delivering mail in Alaska. After their route gets canceled, the dogs are bought by the malicious and rich Hal (Dan Stevens) before Buck finally finds his destiny alongside John Thornton (Harrison Ford).

The Call of the Wild is filled from start-to-finish with CGI animals that never look realistic. I understand a lot of this film couldn’t have been made with real dogs, but at least try to make them look photo realistic. The effects work here harken back to the days of the Garfield and Chipmunks films. With Fox bought out by Disney, it’s a shame the effects in their own live action Lady and the Tramp remake look Oscar-worthy in comparison.

Hal is so cartoonish he even comes equipped with a mustache just begging to be twirled with Karen Gillan simply lounging around drunkenly atop a sled full of luggage. There’s also a hilarious clichéd alpha dog fight sequence featuring a slow motion body slam. And don’t get me started on the silly bow (wow) chicka wow wow courtship between Buck and a wild white wolf.

As for those who came to see Harrison Ford, don’t worry, he doesn’t become an actual part of the story until the movie is halfway over. Oh, marketing ploys. More credit should be given to Sy and Gee as a team of Canadian dispatchers, the two bring some much needed warmth and humanity to the CGI frenzy.

As an avid youngster who loved to read, I remember reading White Fang multiple times, but for some reason, I just never was able to hear the, err, Call of the Wild. Every time I tried to read it I was easily bored and jumped back over to R.L. Stine’s “Fear Street” series, the Scary Stories to Tell in the Dark collections, Michael Crichton, or Tom Clancy. Maybe the tone was too childish for me — something the film relishes.

The Call of the Wild at least seemed to have some crowd-pleasing moments based on audience reactions during the advance screening, however, there are way more eye-rolling/headbanging moments to endure. Perhaps this is another case where it will just bring new interest to the novel for kids to discover and keep London’s legacy alive, but I wouldn’t count on it.