A movie whose back-up plan was direct-to-DVD. Made for women who long for affection and security.

Rated PG-13 for sexual content including references, some crude material and
language. 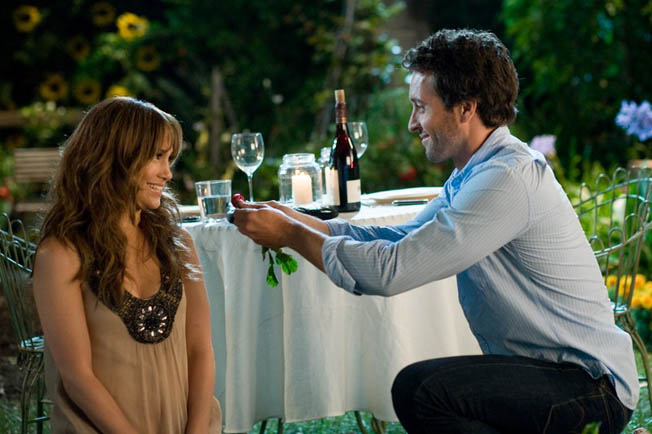 Zoe (Jennifer Lopez, Enough) has passed her mid-life crisis and come to the realization that she may never meet “Mr. Right” and have a family of her own, so she is taking the initiative. When The Back-up Plan begins, we find Zoe with her ankles in the air, having just been artificially inseminated. What a perfectly fitting intro to a tasteless, tactless movie.

While leaving the fertility doctor’s office, Zoe just-so-happens to meet Stan (Alex O’Loughlin, Whiteout), a good-looking guy who shows more interest in her than she shows in him. Being a charming persistent guy, Stan is forced to woo Zoe and put up a fight to get her. Of course, this becomes a metaphor for their relationship once he learns about her pregnancy. You see, Zoe pushes people away – that is the reason why she is a 40-year-old lady with more animal friends than human ones. When Stan decides that he wants to be with her and father her child, he is, once again, forced to fight to stay with her.

The Back-up Plan is a poorly written, scripted, acted and directed movie. Being a film from CBS Studios (Extraordinary Measures), it is fitting that it feels like it is written as a cheesy, unoriginal made-for-TV movie – only with lots of crude, vulgar dialogue and situations. The story lacks originality – being extremely similar to Knocked Up and Away We Go. The situations that the characters are placed in are unbelievable. If someone in reality did the things that Zoe does, no guy would stick around. She is way too crazy. And the fact that the whole movie just plays up the typical preggo stereotypes doesn’t help.

Aside from having only one F-word, there is absolutely no reason why The Back-up Plan should have been rated PG-13. It deserves an R. We see Lopez artificially inseminated, then walk around trying to “hold it in.” We see a bloody latex glove on a doctor’s hand after he finishes a pelvic exam. In that same scene, a doctor inserts a vaginal sonogram. We see J-Lo have a clothes-on orgasm. We see a lady give birth in a kiddy swimming pool, including below the belt nudity. We also get to see them fish around for her stool in that same pool. All things that have no business in a PG-13 film. Considering The Back-up Plan is aimed for an adult audience, an R rating would not have affected its box office sales by much.

Do yourself a favor and steer clear of The Back-up Plan. You owe it to yourself. Watching The Back-up Plan is just as painful as going through child birth (so I’m told) – only there is no light at the end of this tunnel.
Photo credit: CBS Studios